One of the cool features of LIVE photos is that you can create special effects from the image. You can create Loop, Bounce, Long Exposure.

What are LIVE Photos

Live Photos is when your phone takes a mini-video instead of a picture, and the device determines the best possible picture from that video. It's all automatic and takes a few seconds. For special effects, it's great for landscape photography. You can use the long exposure on a night picture of cars to get the headlight trail effect.

Converting a LIVE Photo to GIF

On the iPhone there are two popular Apps that help you convert a Live Photo to a GIF: LP - Live Photo to Video & GIF and ?Lively - Live Photo to GIF on the App Store. There are plenty of choices of converting Live to Gif on the Macintosh platform and the Internet.

A look at the setting options in the apps: 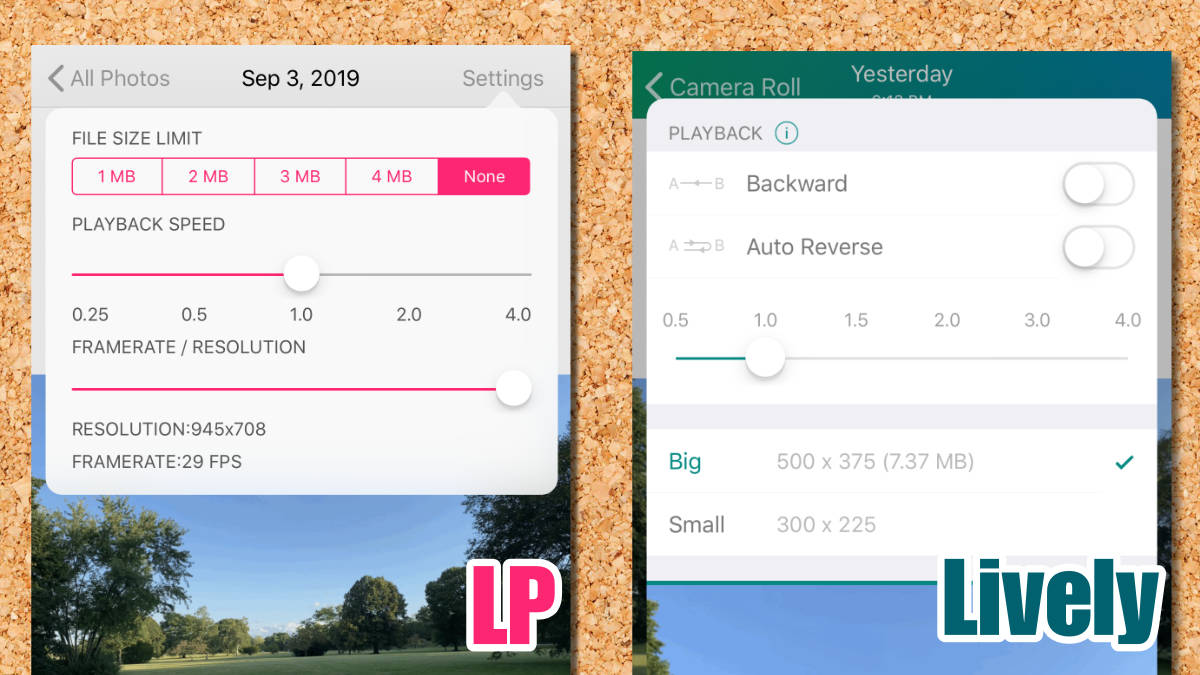 Which is the better one?

They are both good. I think if you do a lot of GIF conversions, your better off paying for Lively app. It is the number one app in it's category for a good reason - it's simple to use and the extensions can come in handy to quickly make GIFs or movies out of Live images.

Check out this picture I took on my iPhone XS Max: 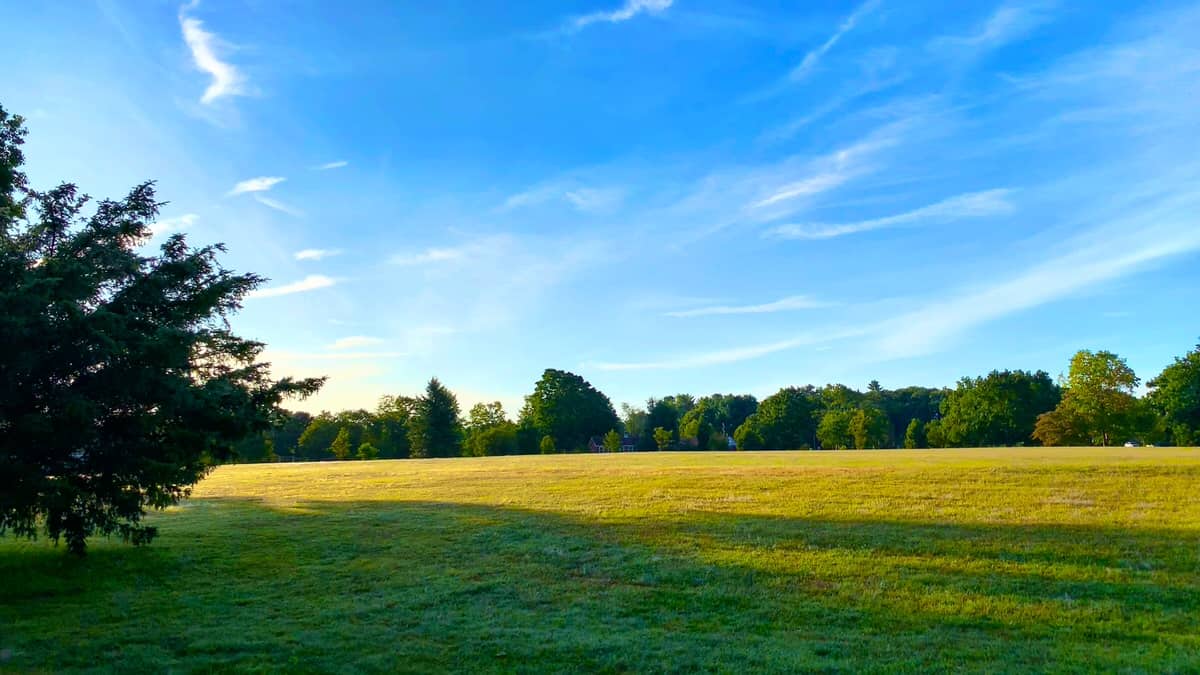 The thing is, it didn?t start that way. This picture is actually a clip from a 4K video. I extracted a scene then touched up the image - all on my iPhone XS Max - in less than 3-minutes.

You can see the image in the YouTube preview. It looks dark and boring.

Steps to Create the Image

Here?s how I got it to work:

I learned that I can extract any image from a video and touch it up to look awesome. It was really easy to do It also gives me more flexibility to decide what is the perfect shot for the situation.

One of the nice things about the DayOne App is the ability to add entries from the past. This is a good way to record entries to show up in the daily timeline.

With Apple?s new iPhone just a few weeks away, I thought it would be a good idea to record when I got my past iPhones. Each entry contains the device first photo and the location where purchased.

This is what I was able to gather: 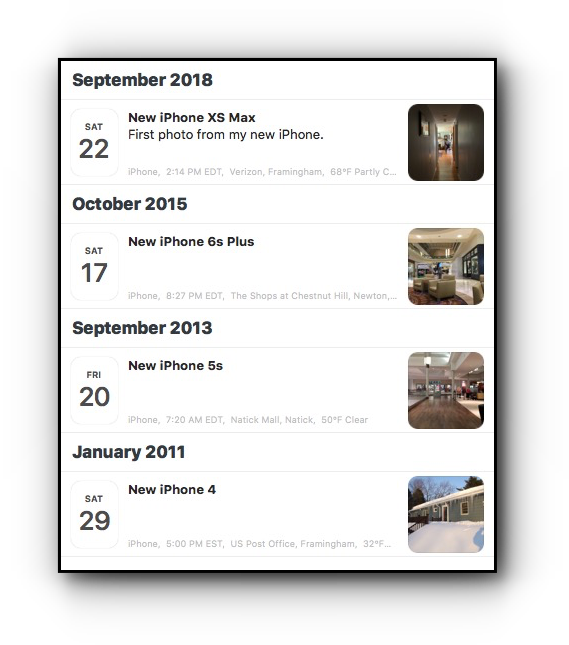 Some of the information came from memory. Others cane from receipts from Apple or Verizon on when the devices were activated.

I was able to find the photos using Google Photos. I just needed to know the date of purchase.

DayOne is a great application to record memories. It?s a great way to recall important dates in the past. You can tag old entries to help remember when the event occurred. 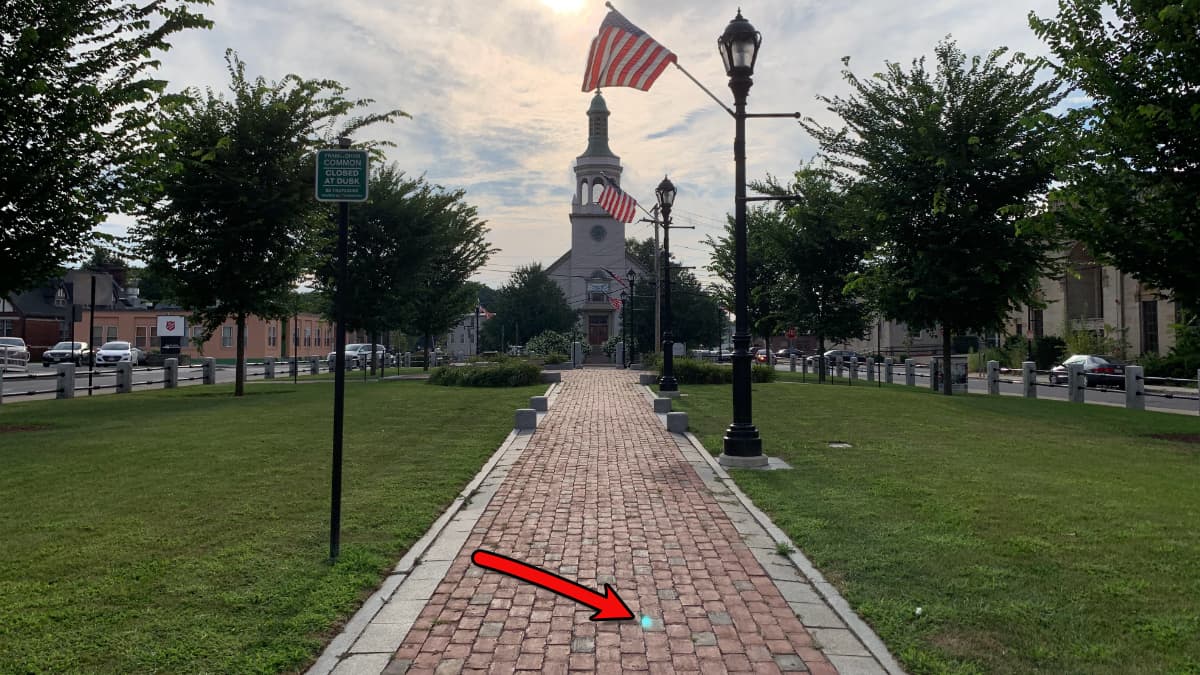 It might be hard to see, but after seeing in a number of photos, it can stand out.

The green dot occurs because of the angle of the light coming into the camera. This usually occurs when taking pictures of light such as sunrise, sunset or a street light that occurs in the picture.

I have also encountered this problem on videos too. It's more visible since the blue dot moves around.

How to Avoid the Dot

I usually don't notice the green dot until I look at the picture long after it was taken. Well too late to make adjustments.

Now that I know how/when the dot occurs - the presence of bright light shining directly in the camera, I can tilt the camera so the dot doesn't appear.

In addition, I'll be sure to look out for the presence of the dot on the screen when I am taking pictures in certain situations.

It's easy to remove the dot in Affinity Photo using the Inpainting Brush Tool, or using PhotoScape's Spot Healing Brush - located in the Tools section.

Dress up your iPhone XS Max with a Haunted Mansion look for the 50th birthday. 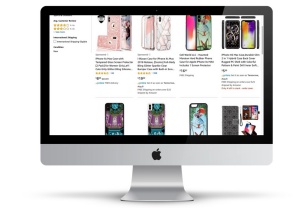 Amazon has a lot of great design choices from various vendors. Pay attention to the shipping time as some may come from cheap outlets from overseas. 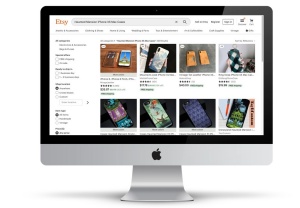 There are some creative design options on Etsy. I like some of the styles and layouts - clearly some haunted mansion fans here. 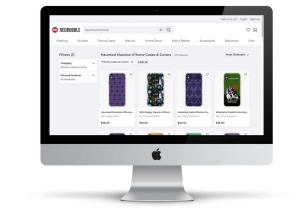 This site has the most selection from one vendor. Great designs and styles to choose from. 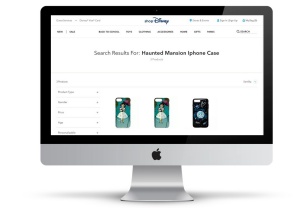 Disney doesn't offer than many design choices. But these are the official designs - so if you want to stay "official" this is the shop for you.

Three Reasons Why You Should Not Get them At the Parks

Photo with a Window Screen

Taking a picture through a window screen can be tricky using the standard iOS camera app. Most times it will focus on the screen leaving the background blurry.

Using the ProCam App, I can remove the screen from the photo focus.

The easiest solution is to use ProCam where you can easily adjust the focal range - and lock it in. That way you can get multiple shots of the outside through the window screen.

Nobody wants to read product manuals. But if you're on the train with nothing else to do -It doesn't hurt to read some of the documentation about your iPhone. You may learn some cool trick about your phone.

Just remember to download the User Guide before you start your travels. 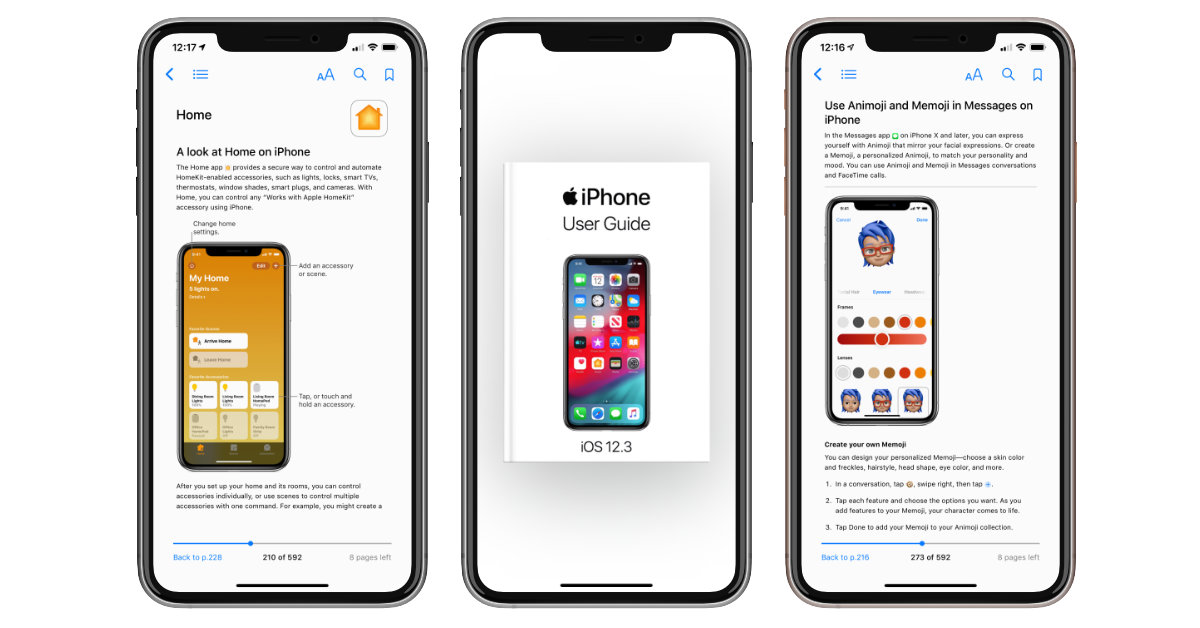 How to get the iPhone User Guide

Open up the Books apps, click on search and then search for iPhone. As of this writing, you'll want the iPhone User Guide for iOS 12.3.

You can also get to the iPhone User Guide for iOS 12.3 via the Apple Store Link. This book can only be viewed on an iOS device, and it's Free!

There are other iPhone books available, I would recommend starting with the Apple Book first.

The iPhone XS Max has two HAC Ratings for Hearing Aids: M3 and T4. In fact, Apple has had the two ratings since the iPhone 5s.

The ratings are are the American National Standard Institute hearing aid compatibility standards. They measure the radio-frequency interference and how well the inductive coupling works.

The ratings are based on a scale from 1 to 4.

The iPhone XS Max is hearing-aid compatible under the FCC requirement guidelines since they are within the acceptable range for radio-frequency and inductive coupling.

While this is good news, it doesn't mean that your hearing aid may work. It's highly recommended to test the iPhone at an Apple store. Simply ask one of the workers to test your hearing aid with a phone. (Floor models don't have the cellular activated, you will need to use a special phone for testing.)

The Oticon Opn 3 works great with the iPhone XS Max. The sound quality is great and very clear. Audio is stream directly into your hearing aids without anyone knowing via the MFi connection bridge.

The MFi connection bridge is like a Bluetooth connection but doesn't work the same way. You can't just sync the hearing aid to any Bluetooth device.

Using the iPhone XS Max, have you ever experience a situation where the video would flicker as you zoom. This is because the iPhone XS Max is switching between the two lenses to get the best possible picture.

Setting up the Lock Lens settings

What Happens When enabled

When you have the Lock Camera enable the iPhone won't switch lens when you zoom in during the recording. You'll get a nice smooth zoom.

These settings have no impact when you zoom in to take pictures or when you set up the video before recording. The "Lock Camera" will not prevent you from using the Telephoto lens.

Note this only effects the Camera app. This has no effect on ProCam, Camera+ 2, or ProCamera apps.

Burst mode, also known as continuous shooting, is a creative way to make sure you catch all the action on camera. What it basically does is take multiple photos which created a sequence of images. You can then later pick the image that works best for you. For example, in an action shot you may pick the photo that shows the runner suspended in Mid-air. 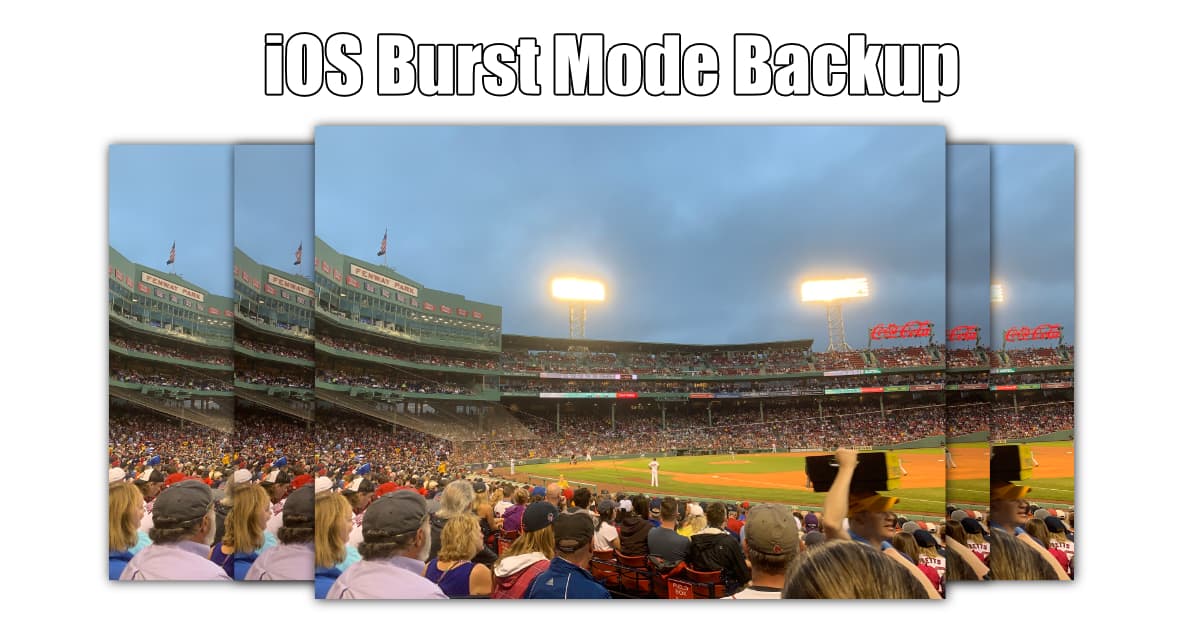 All burst photos get downloaded.

Only the first image is backed up to Amazon Photos.

By default only the images you select as your favorite are uploaded. You can change this by going to Settings, then Search for "Burst" and then turning on "Upload Burst Mode"

Only the favorite image in a Burst mode set is backed up to Dropbox.

Only the first image is backed up to Microsoft OneDrive.