This fall marks the 100th anniversary of the World Series. The field, Huntington Avenue Grounds, where the first World Series was played no longer exist, it is now the main part of the Northeastern University campus. In 1993, the Yawkey Foundation put a marker and a statue of Cy Young to show where the pitching mound and home plate use to be. 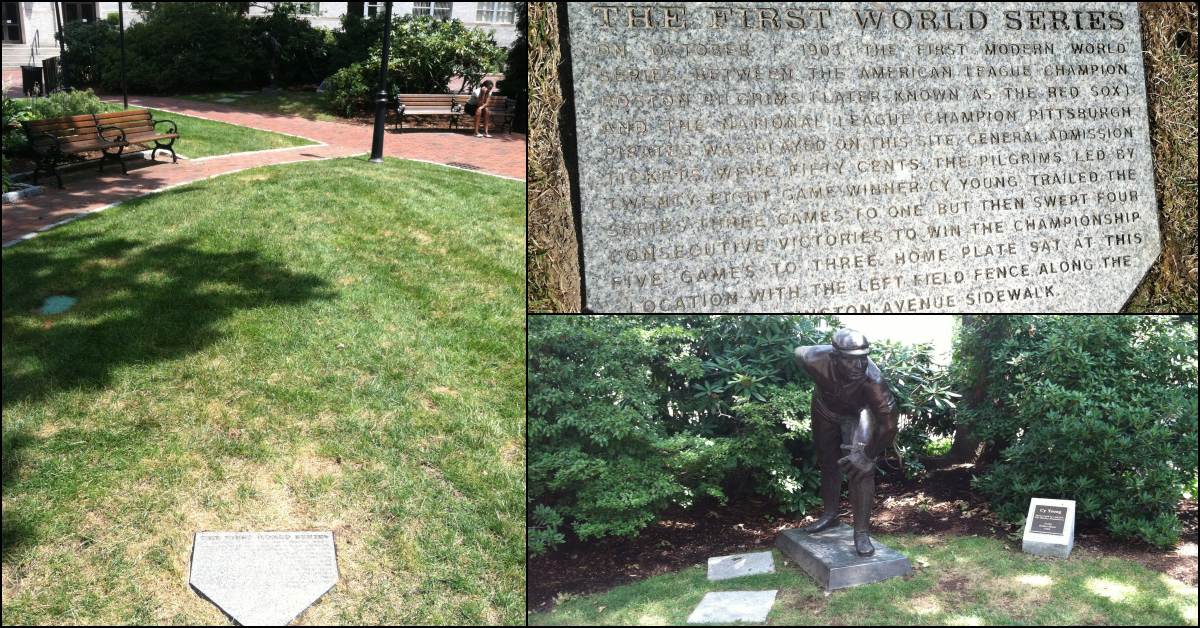 This is the inscription on the home plate:

On October 1, 1903, the first modern World Series between the American League champions Boston Pilgrims (Later known as the Red Sox) and the National League champions Pittsburgh Pirates was played on this site. General Admission tickets were Fifty Cents. The Pilgrims led by Twenty Eight Game winner Cy Young trailed the series three games to one, but then Swept Four consecutive victories to win the championship five games to three. Home plate sat at this location with the left-field fence along the Huntington Avenue Sidewalk.

Directions to the Cy Young statue at the old Huntington Avenue Grounds:

By Public Transportation:
Take the Green Line (E Line) to the Northeastern University Station stop. Head towards Forsyth Street, the intersection you see when you get off the train. Cross the street towards Northeastern University, stay on Forsyth Street. Take a left after you pass by the Bank of America ATM, that pedestrian path is World Series Way. Walk down World Series Way for about 50 yards and you'll see Cy Young statue on your right in a little park.

This is a nice place to visit if you're a Red Sox Fan. There's really not much else to see here, there is just a statue and a home plate marker. Have a bit of fun and bring a baseball to see if you can throw a strike.