Today I took my daughter skiing at Blue Hills in Canton Massachusetts. This was her first time on skies and I haven't been on a mountain in 18 years.

We just decided to ski together without any formal lessons. I would just give her some tips and tricks on how to ski.

We had a fun time skiing and she actually wants to go back next weekend. 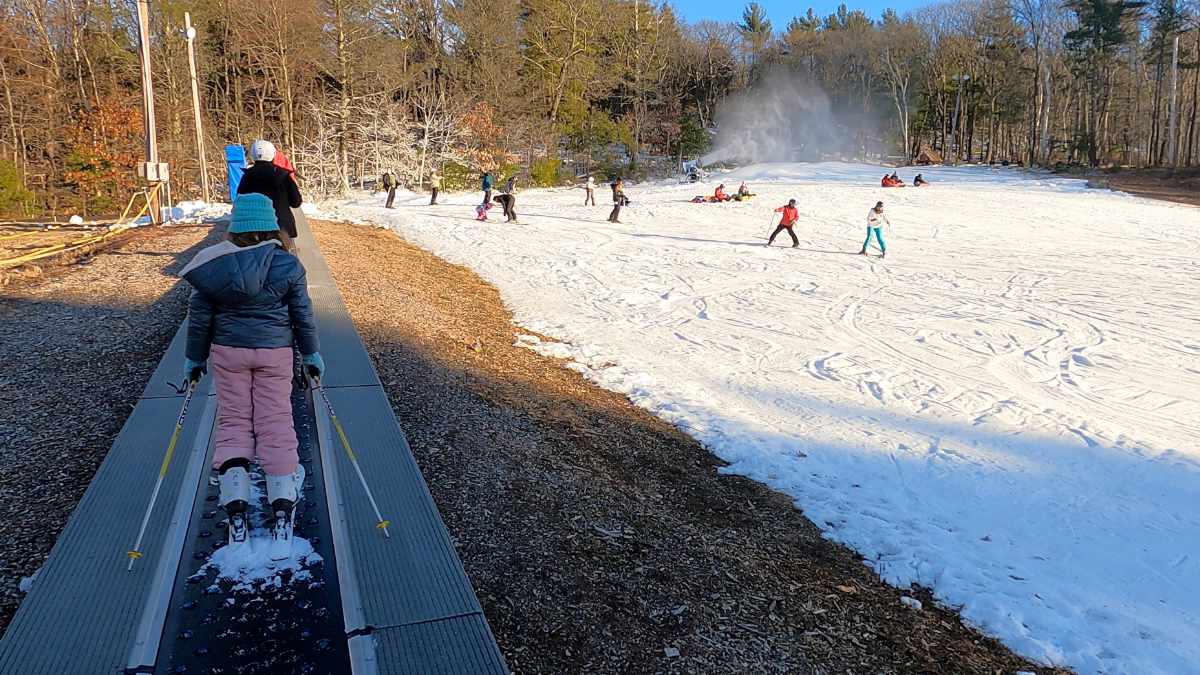 Blue Hills "Fenway" trail with the magic carpet taking skiers to the top of the trail.

Reservations Required. Due to COVID-19 state rules, we had to make reservations. We were able to secure a spot the night before we hit the slopes.

Time Constraint and Cost Also new this year is that you limited on how long you can ski. We had a 4-hour slot. Which was probably just enough for my daughter's first day on the slopes. However, it seemed expensive for 2 tickets and rentals for $170.

Confusing On Arrival. Prior to going to the ski resort, I checked the parking lots. I found that there were three lots and getting the first or second was ideal because I didn't need to take a shuttle bus. We were lucky to get a spot in the second lot. When we got to the buildings it was a bit confusing where to get tickets. We had prepaid rental and there was a section for that - however it was for people that had been there before. We met other people that were also confused.

No Private Lessons. As were skiing we saw a Blue Hills official approach a guy with several children and asked him if he was giving paid lessons. Apparently, you can't give private lessons that are not sponsored by the mountain. This could be a liability reason or they want people to use the mountain training.

Great Mountain to Learn. We found that Blue Hills is a great mountain to learn to ski. Its small size makes it easy to go up and down the mountain.

Limited Skiing. When we went, there wasn't much natural snow on the ground. Many trains were closed because they don't have 100% snowmaking coverage. Also once you become good at skiing, there's a limited number of trails to ski on.

Food and Drinks. The cafe was open. When I walked in, someone asked me if we plan on using the bathroom. I told them no, then he asked for my name and phone number- which I assume was for COVID-19 contact tracing. A bottle of Poland Spring water is only $1 - that was nice.

Fenway Trail. We spent all day on the Fenway trail. It was busy because most people had lessons on that slope. One thing I noticed is that most people didn't have any poles.

Magic Carpet Lift. The two green trails are served by two Magic Carpet lifts. The lift is a conveyor belt that gently moves you up the hill. I found it a bit tricky to use - I have been on a lot of lifts. Basically, you walk on the carpet and standstill as it moves you. I noticed some people lean forward to help keep their balance. 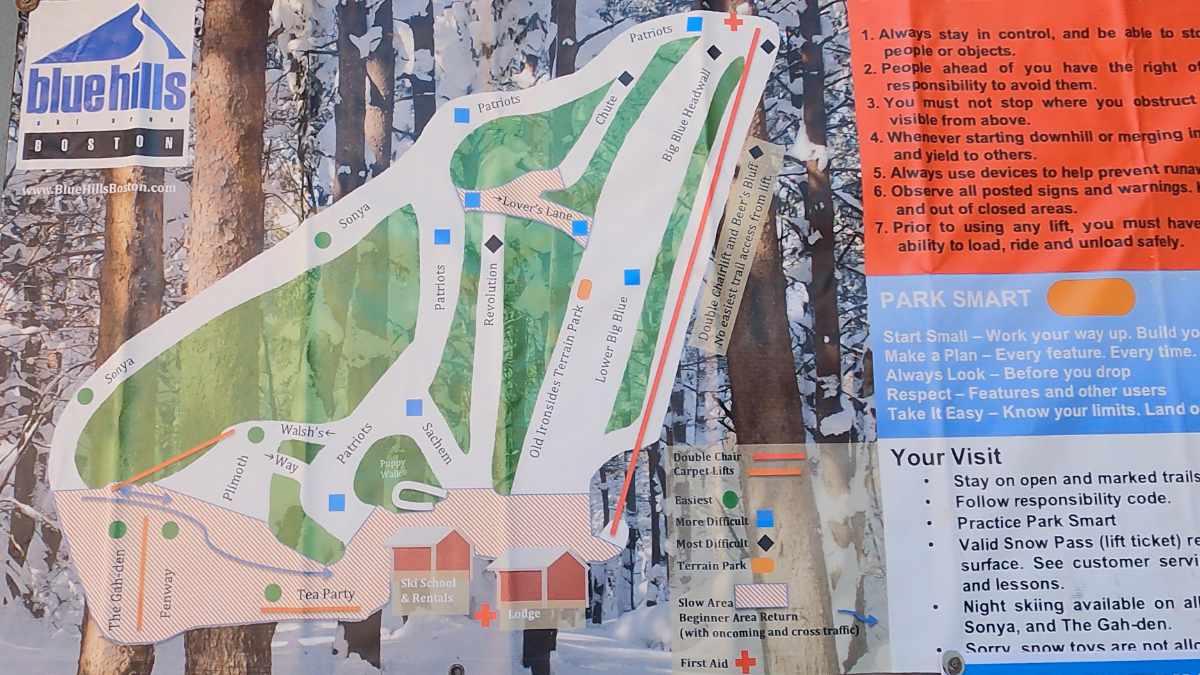 A picture of the trial map that hangs near the ticket window.

If you're going to Blue Hills, I would recommend getting there at least 45-mins early to get rental equipment and lift tickets. Your ski time is when you can get on a lift and not when you can get your equipment.

During the Spring and Summer months, I blogged about various New England locations. It was fun thinking up all the various locations that I have visited over the years.

Here are 8 of those posts that are worth reading: 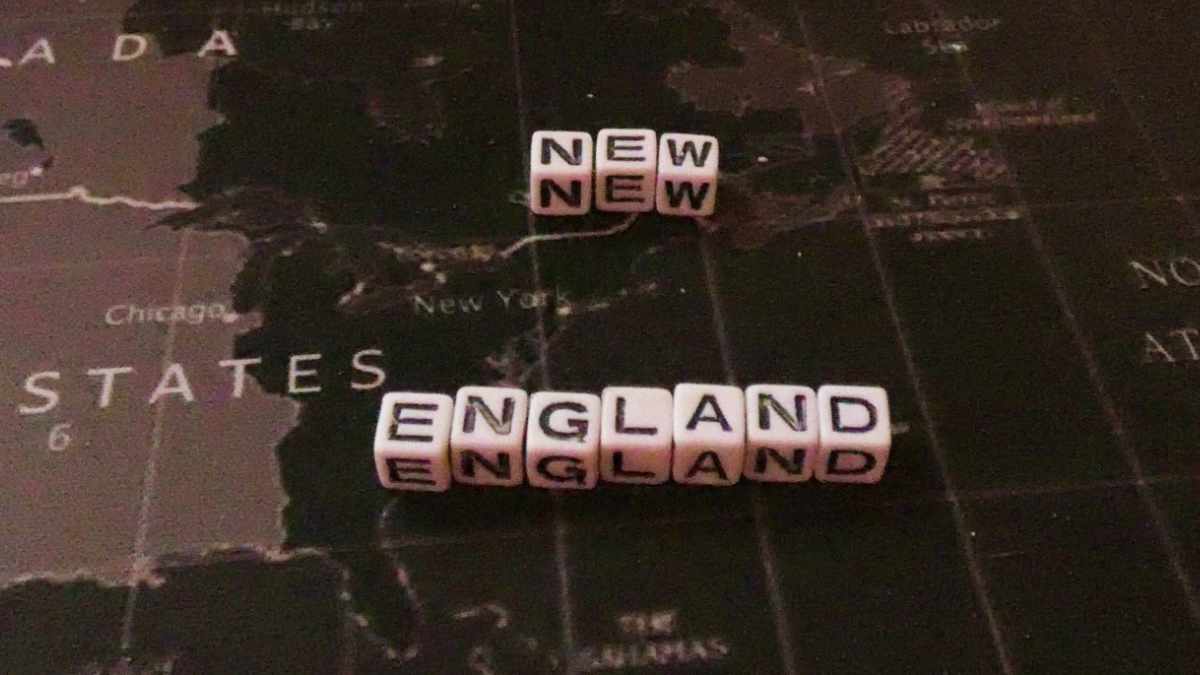 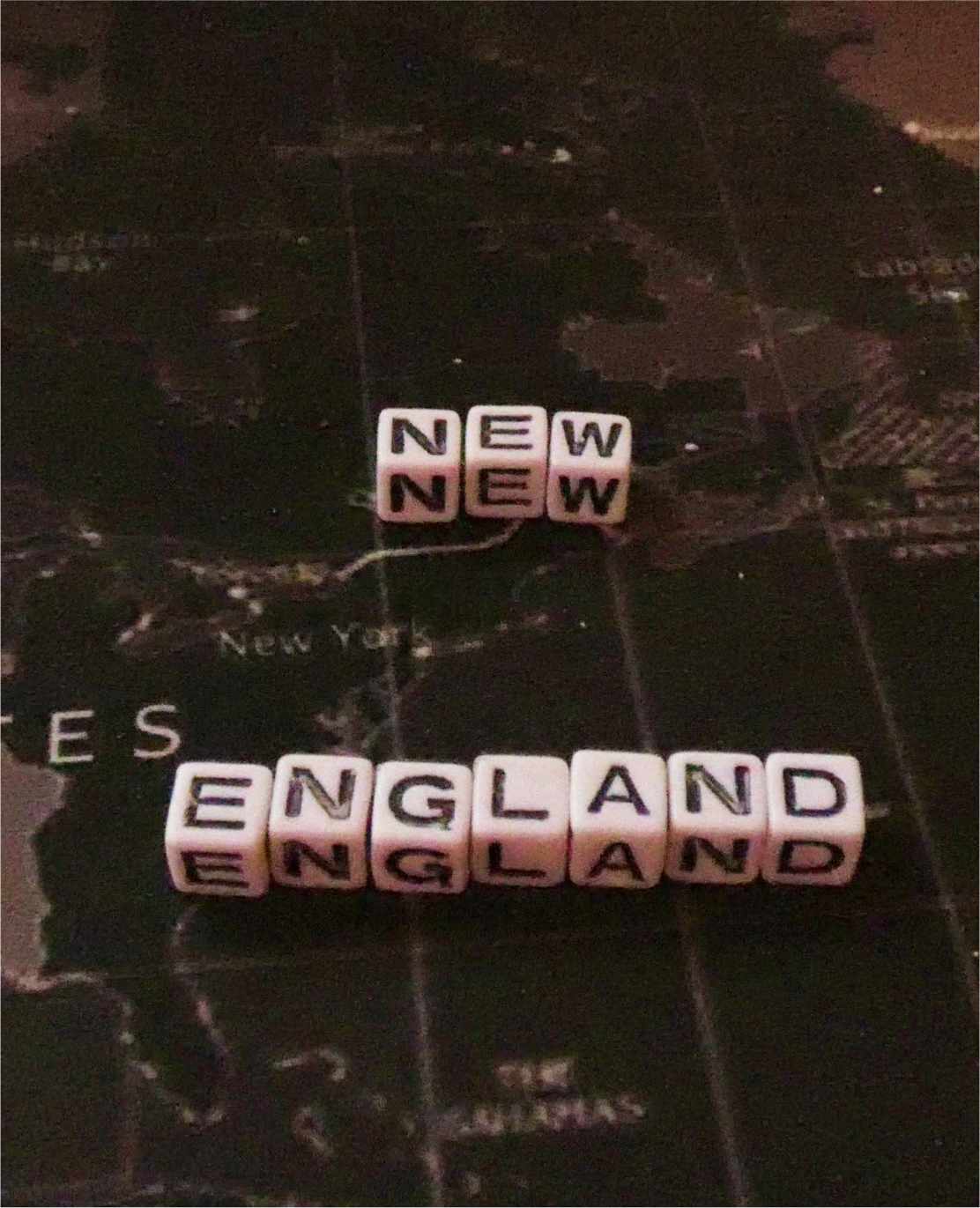 I plan on revisiting this topic again sometime in 2021.

This past weekend we did the Magic Lights at Gillette Stadium in Foxborough. We had a great time enjoying the lights and celebrating the Christmas season.

Here are some of my notes from that trip - hope it helps others have a great time! It's 2020, this is a safe way to enjoy the Christmas season. 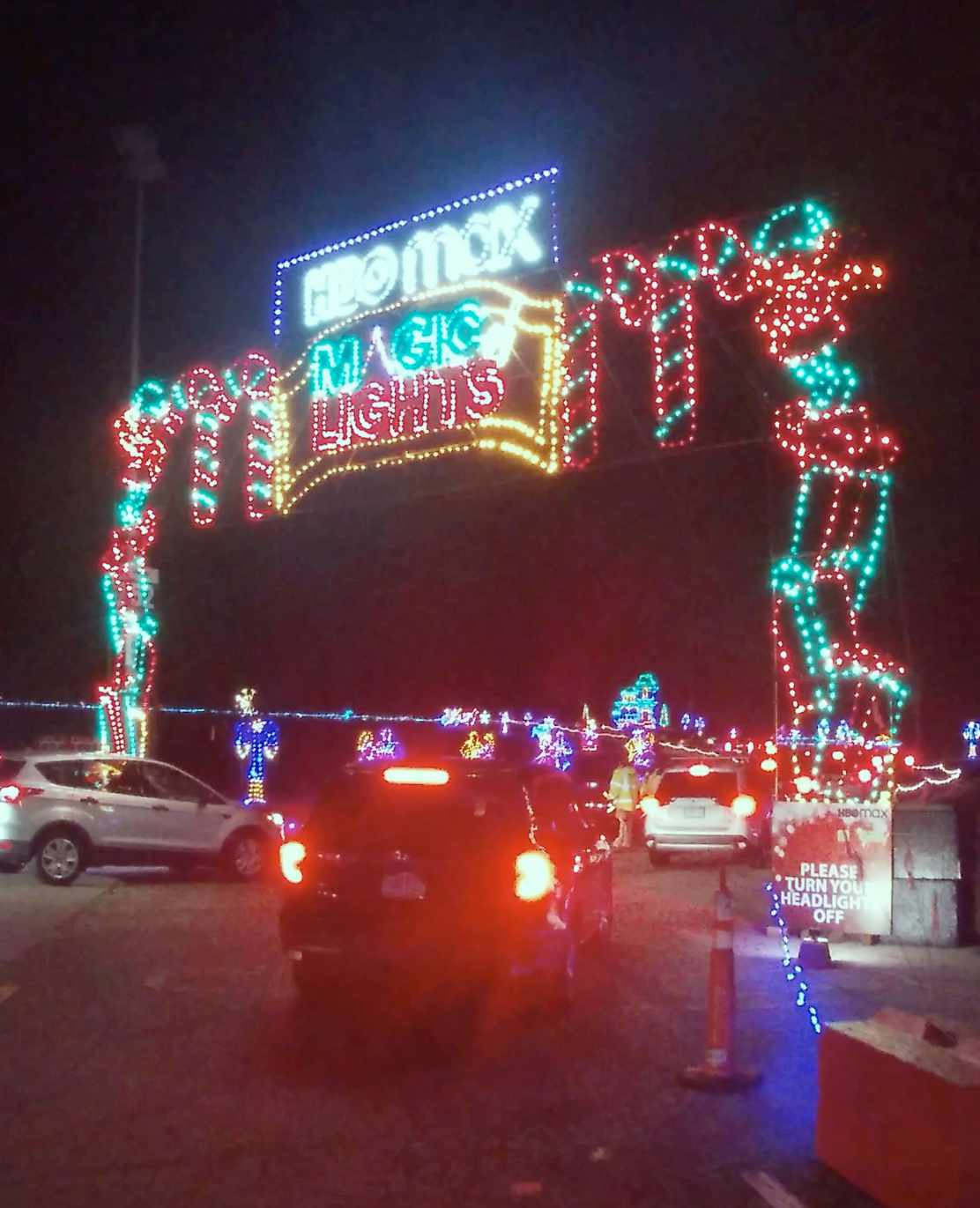 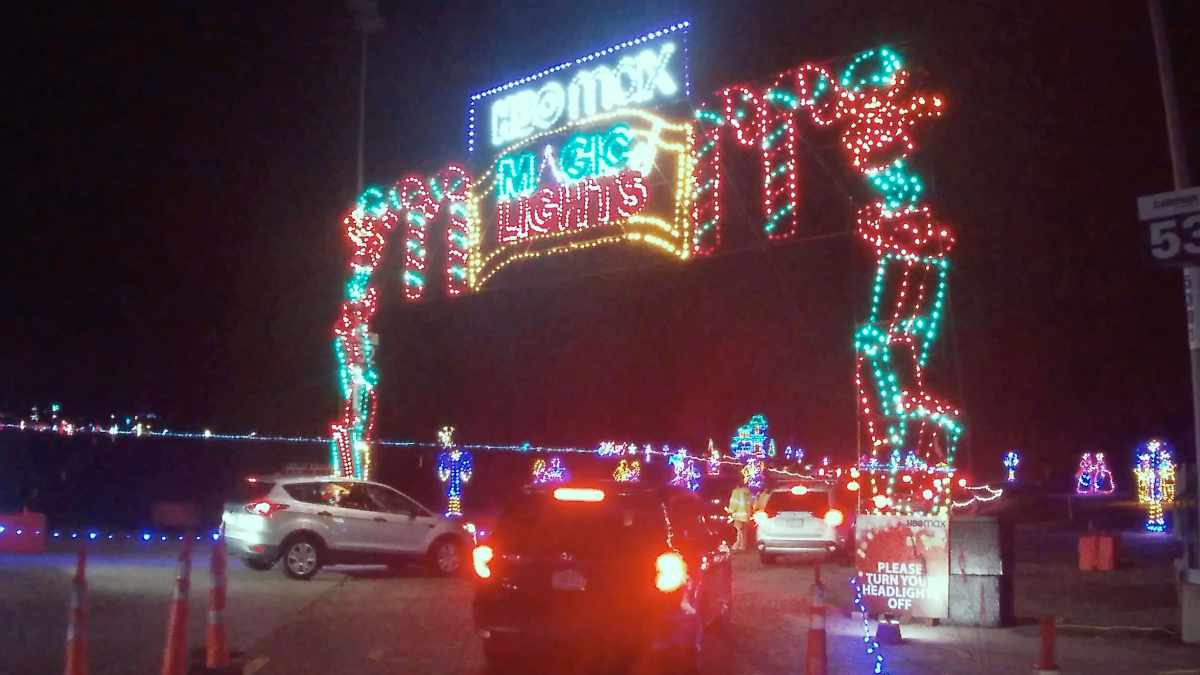 We found out that most people arrive as soon as the gate opens, you might want to wait for at least 45-mins to avoid the long traffic line.

Many kids were were enjoying the lights by standing up and looking through the sunroof.

The show was great! Drive slow to appreciate the decorations and selection. For example, we saw some lights that represented the 12-days of Christmas - I am sure they are all there.

There are two lanes that go through the whole light show. Both lanes appear to offer the same viewing experience. (We did see some lights out on various sides.)

Don't forget to turn off the headlights when driving around!

When you leave the exhibit you end up going south on Route 1.

This isn't a Disney ride, there are no gift shops at the end of Magic Lights.

Walking around Salem's historic "The Burying Point" graveyard, you'll encounter some fascinating colonial gravestones. One of the gravestones that stands out is Simon Bradstreet. He was buried here in 1697, 323 years ago. 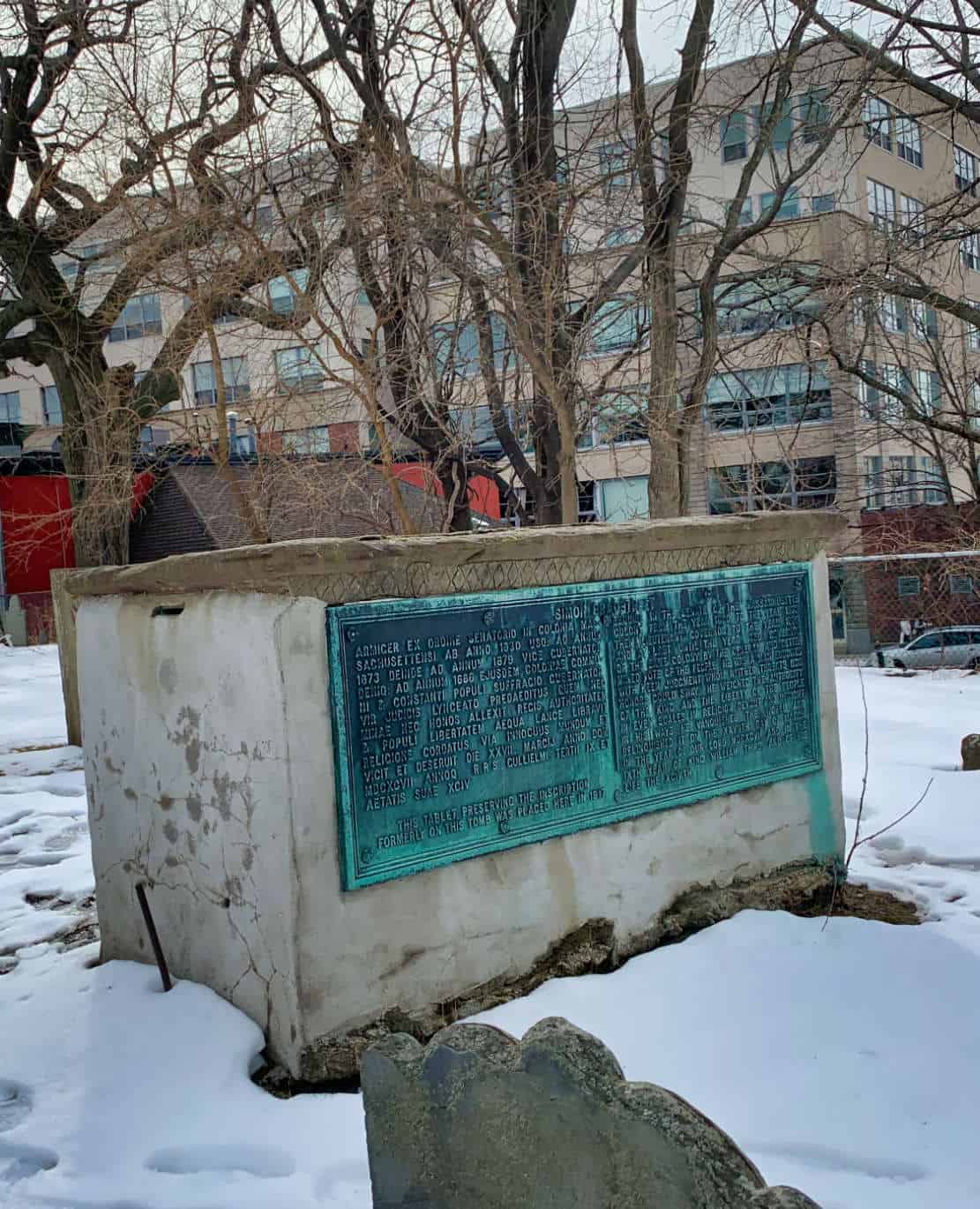 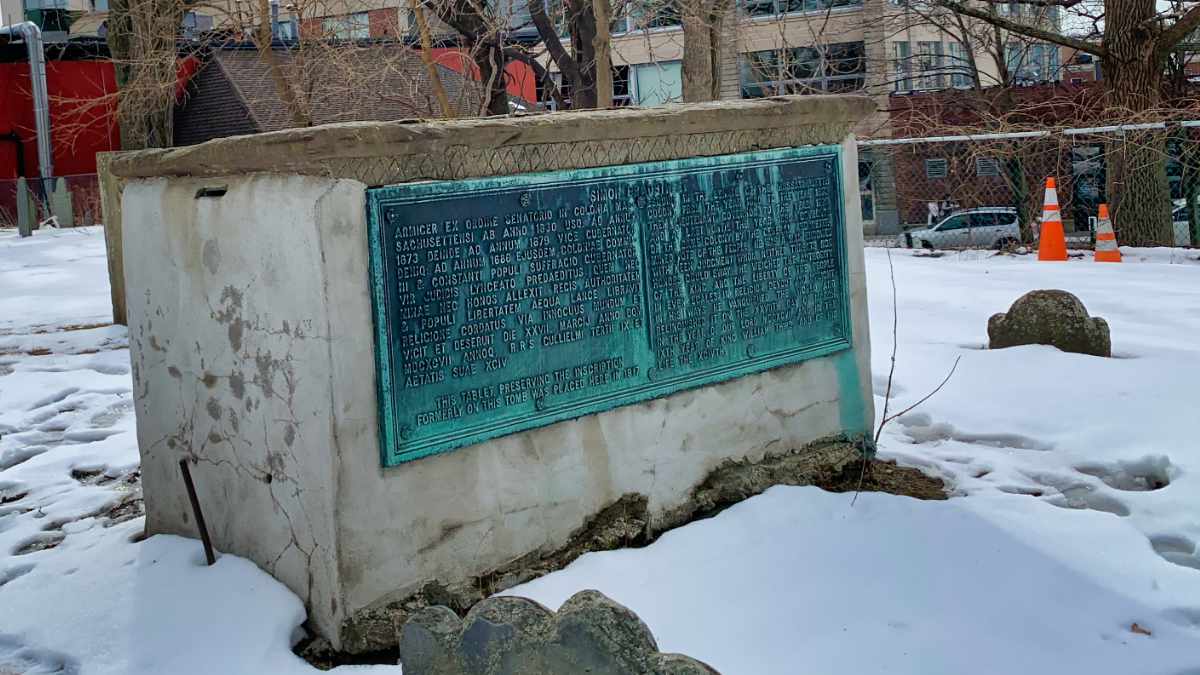 He came to America in 1630 with John Winthrop

Simon Bradstreet was one of the original founders of the Massachusetts Bay Colony.

He lived in Cambridge, Ipswich, and Andover, Massachusetts.

He lived to be 93 years old and was called the "Nestor of New England" by Cotton Mather because of his old age.

His son, John Bradstreet, was accused of being witchcraft. He left Salem for New York. He returned to Massachusetts when the Witch hysteria died down.

If you look carefully at the writing on the gravestone, at the bottom right, you'll see "Woodland Bronze Works -Newburyport Mass." It was a company in Newburyport that created bronze tablets. The company was founded by George. P. Tilton. Tablets were created by the Cire-Perdue process.

The text on the left side of the tomb is written in Latin.

Text on the Tomb

Esquire in the Senate of the Massachusetts Colony from the year 1630 to the year 1673. Then Lieutenant Governor to the year 1679 and at last, Until the year 1680. Governor of the same colony by the general and determined vote of the people. He was a man endowed with keen judgment whom neither threats nor honors could sway. He weighed the authority of the king and the liberty of the people in even scales. In religion devout and upright in his ways, he vanquished the world and relinquished it on the XXVIIth Day of March in the year our lord MDCXCVII. and in the IXth year of King William third and of his life the XCIVTH.

The Last two-line reads: In religion devout and upright in his ways, he vanquished the world and relinquished it on the is 27th (XXVIIth) Day of March in the year our lord 1697 (DCXCVII). and in the (9th) IXth year of King William third and of his life the 94 (XCIVTH)

In the 1980s, One of our favorite Cape Cod restaurants was Thompson's Clam Bar. It was a family tradition to get some seafood and watch the boats come into Wychmere Harbor. 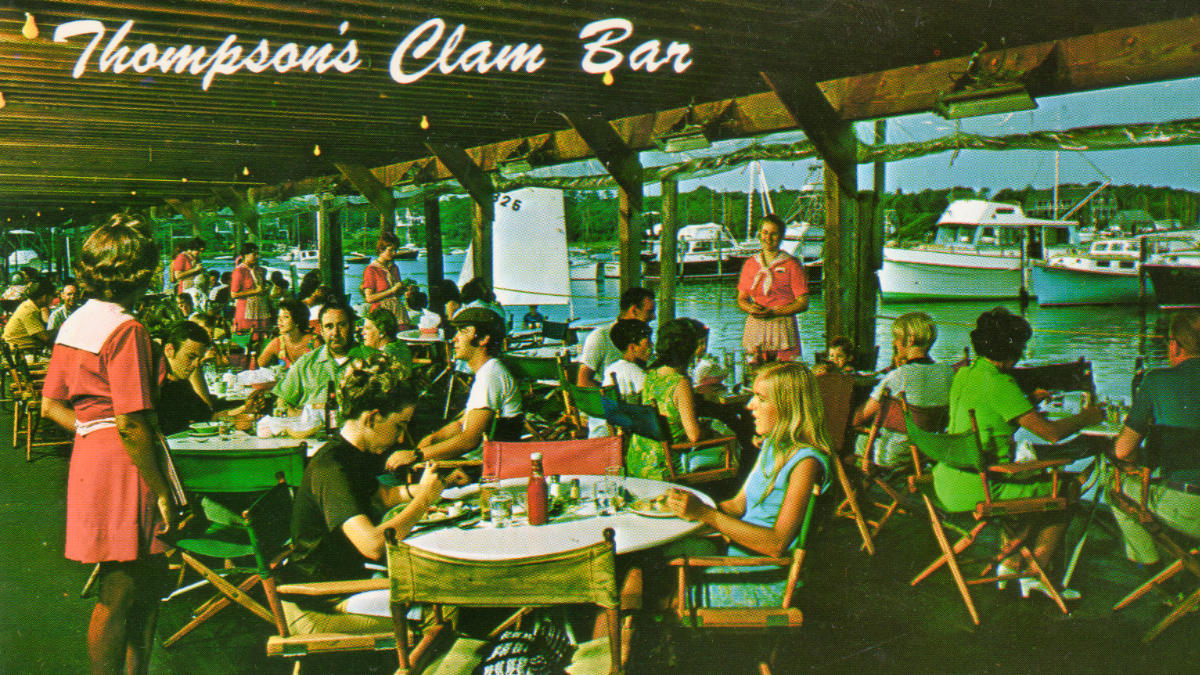 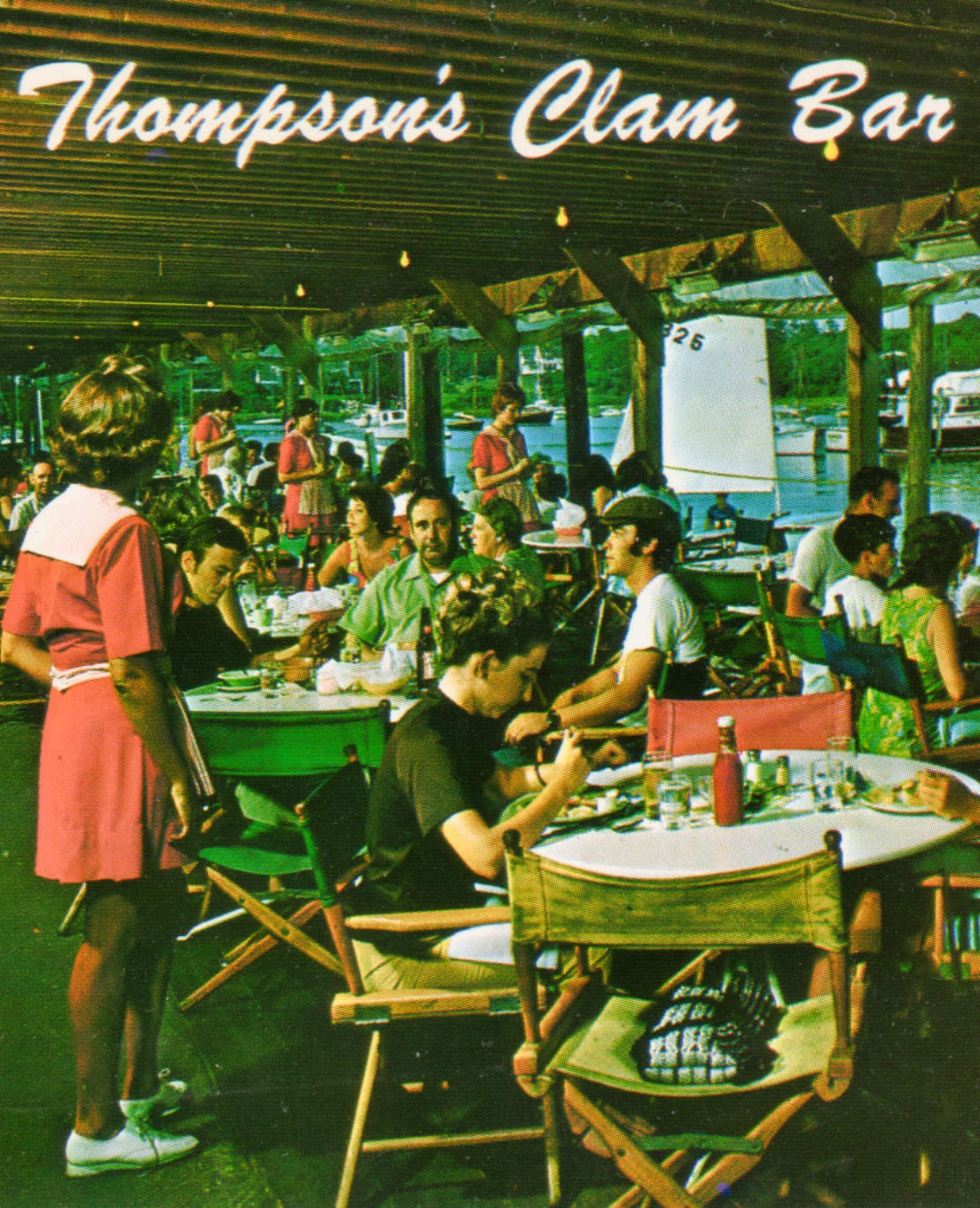 Remember that jingle: "Hey Where Are You Going..."

Things I Remembered About Thompson's

The restaurant closed in December 1995.

People would wait for hours to get into the 450 seat restaurant.

You could arrive by boat and tie it to the dock. I remember people helping boaters dock their boats.

They offered valet parking and on a busy summer night the car line would back up to the main road. We used to go around and park at the club.

In the late 1980s they put in an outside bar. People could order drinks and appetizers while they waited. They had some kind of bar rice snack in baskets on the tables. They were so good.

In the Summertime in the late 1980s, I worked on the other side of the river at HarwichPort Boat works. I can remember that fresh clam chowder smell - just before lunch hour.

I also remembered getting a steam lobster that smelled like bleach. I asked the waitress to take it back as there was something wrong. I got a new lobster a few minutes later. I enjoy the baked stuff lobster and always treated it as my summertime treat.

The Quabbin Park Cemetery is located in Ware, Massachusetts. It's most famous for being the resting spot for those buried in towns that were eliminated for the Quabbin Reservoir.

Quabbin Park Cemetery was developed in 1931-32 to house 7,613 graves from the disincorporated towns of Greenwich, Dana, Prescott, and Enfield, after taking 81.,000 acres of land to create an enormous reservoir for Boston.

The graves were moved from 34 cemeteries in the four towns.

One Indian gravesite was not moved as the locals couldn't properly remove the graves as many sites were unmarked.

7,613 graves were moved from 34 cemeteries scattered throughout eight towns.

Various war memories that use to be in town centers of Greenwich, Dana, Prescott, and Enfield are now located in the cemetery. The cemetery has become a memorial to those towns.

One of the Ware locals told me - years ago - that the bodies were not placed at the gravesites. Instead, all the bodies were placed in a crypt that you see as you drive into the cemetery.

In August we woke up early to catch the summer sunrise at Nauset Beach in Orleans Massachusetts. 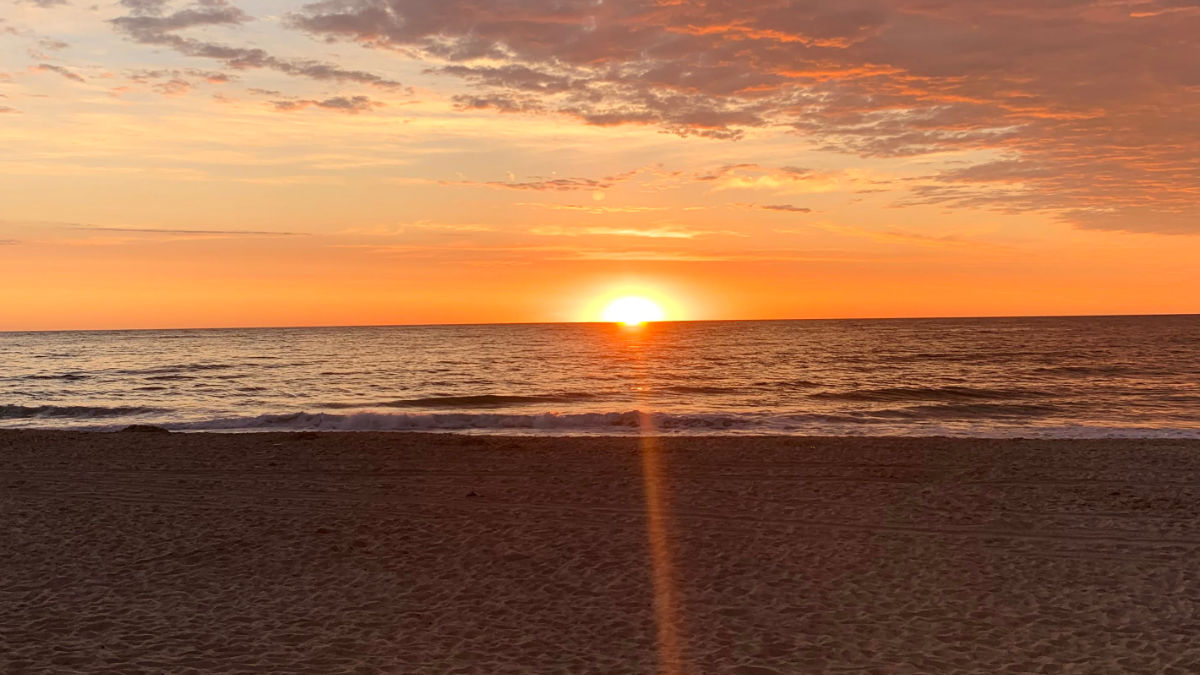 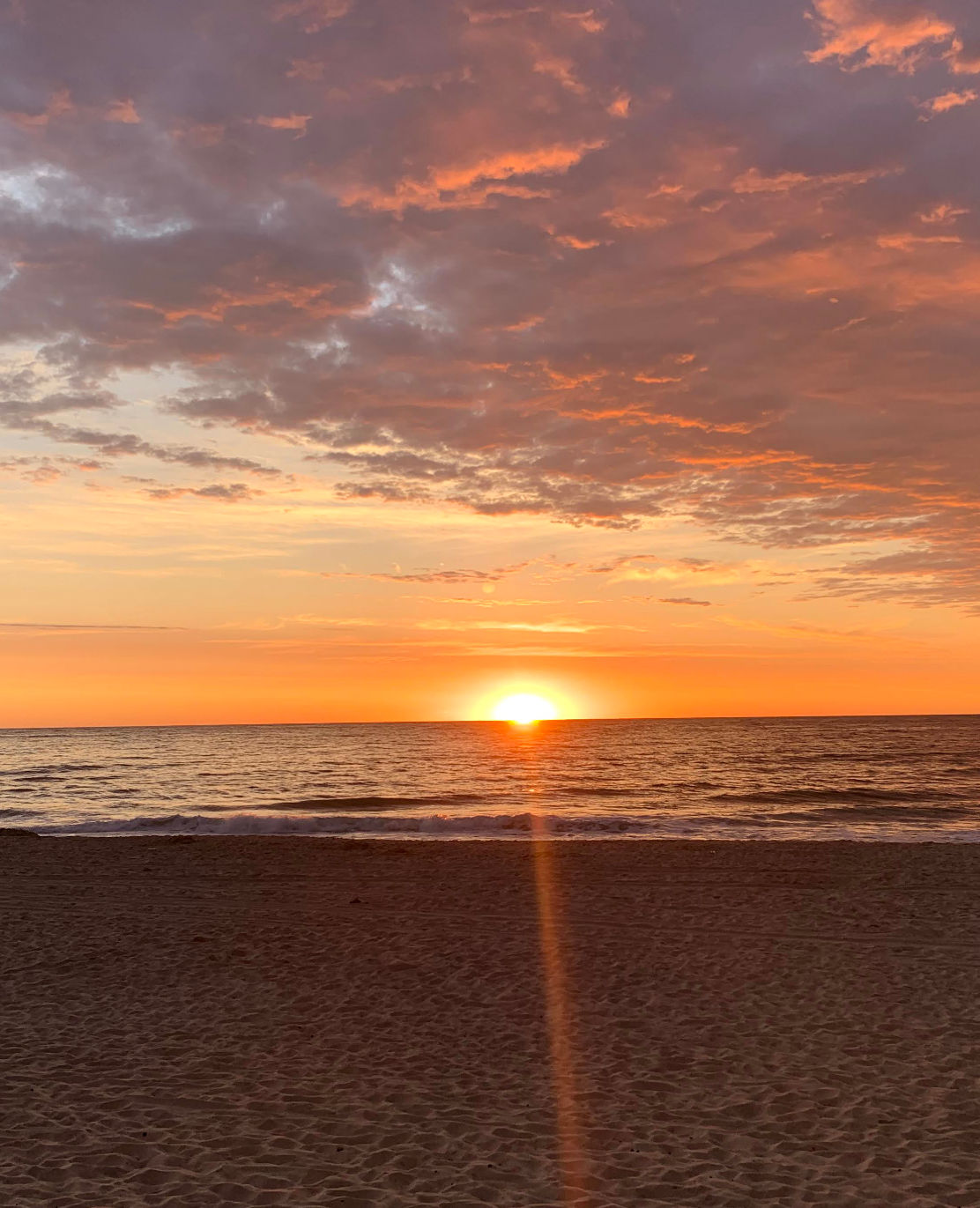 One of the advances of the some of the towns on Cape Cod is that you can get gorgeous sunset views. Provincetown, Truro, Wellfleet, Eastham, Orleans and Brewster offer great sunset views from various beaches.

Recently we stopped at OceanEdge in Brewster and took some fantastic photos of the summer sunset. 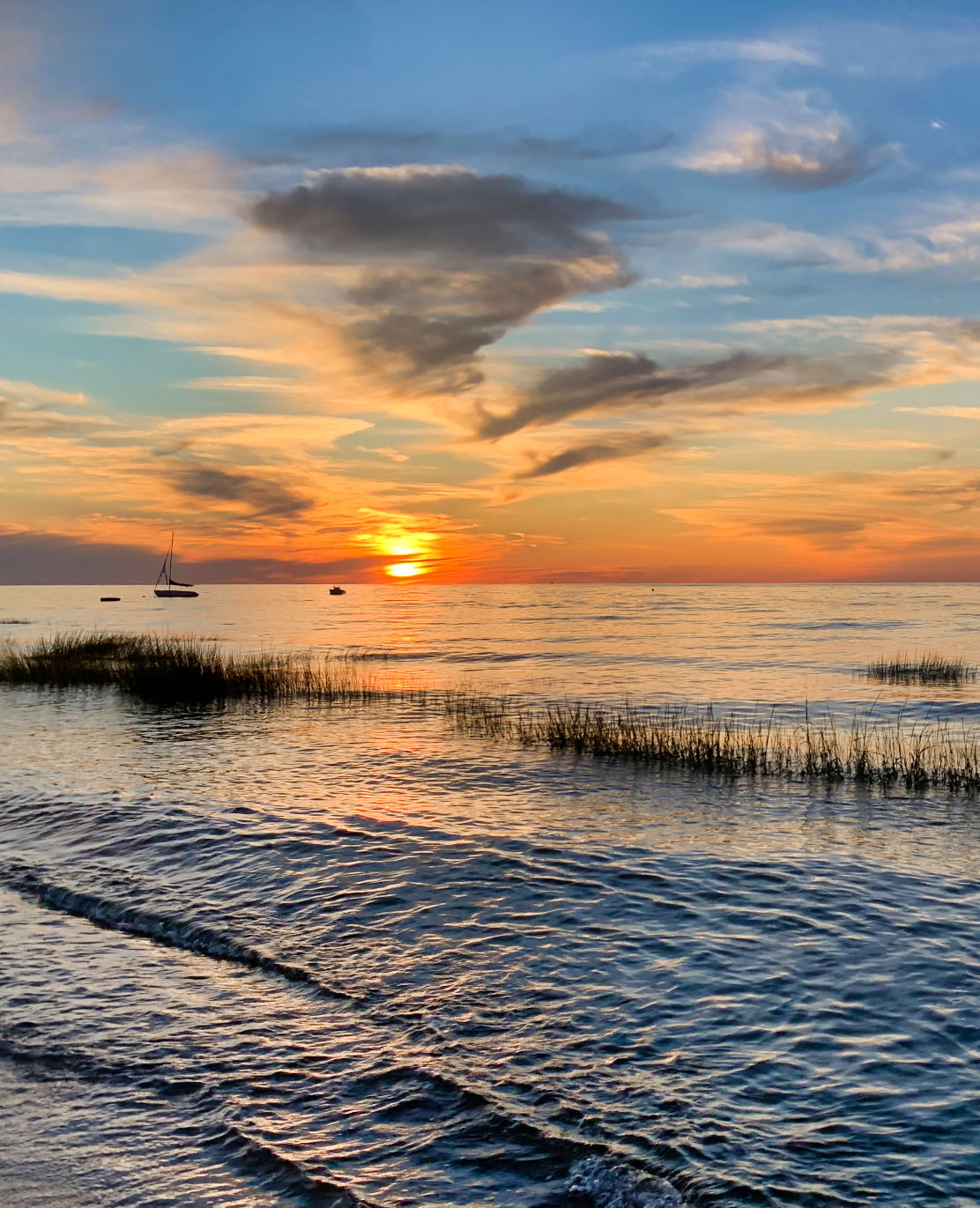 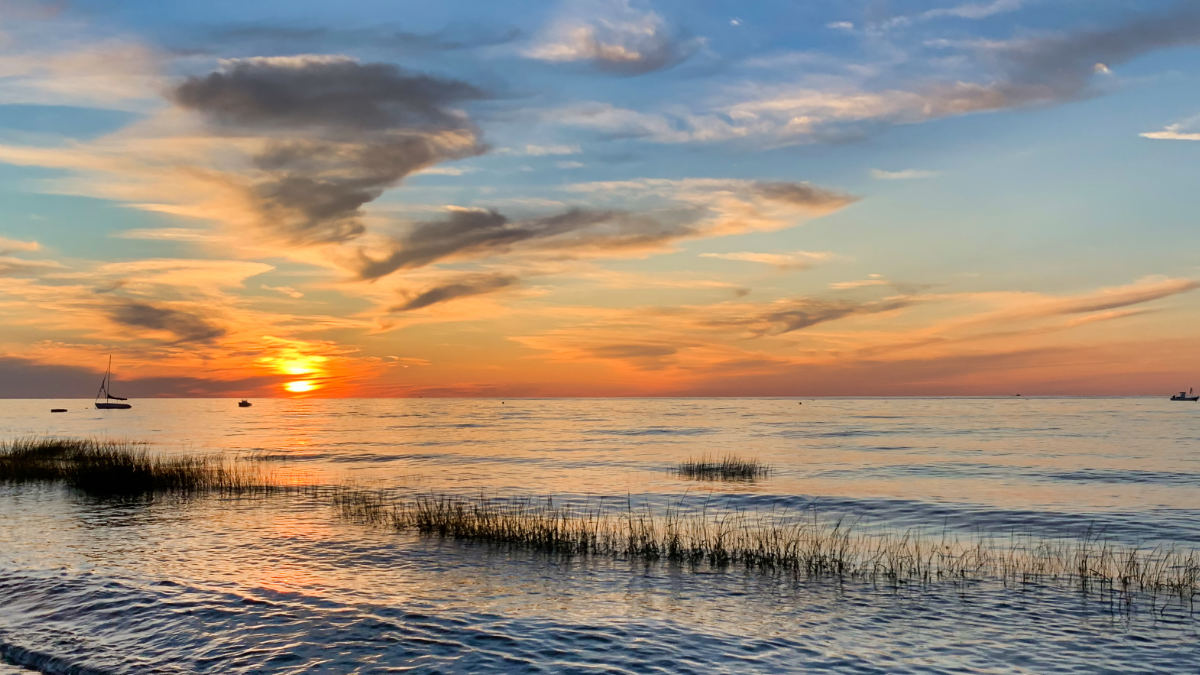 You have to have an OceanEdge beach membership to get on the beach.

You can try some of the nearby public beaches, Ellis Landing Beach, but the beach at OceanEdge seems perfect for photos.

Check the tides before you go. If it's going to be high tides it means that there won't be much of a beach - get there early.

We saw a family that had a fire with S'mores. This is a package deal that you can buy from your waiter.

If you don't want to sit on the sand, you can always sit and watch the sunset from the bar.

There were a lot of people taking pictures. Best to keep walking along the beach so people don't get in your pictures.

One of the fun educational places that we like to visit is the Drumlin Farm Wildlife Sanctuary in Lincoln, Massachusetts. It's a great place to spend a day learning all about the local area of wild life.

One of the nice things about this place is that it's open all year. In the winter months, you can learn about how wildlife survives the harsh New England Winters.

This is also a great place to take school field trips and scouts trips. 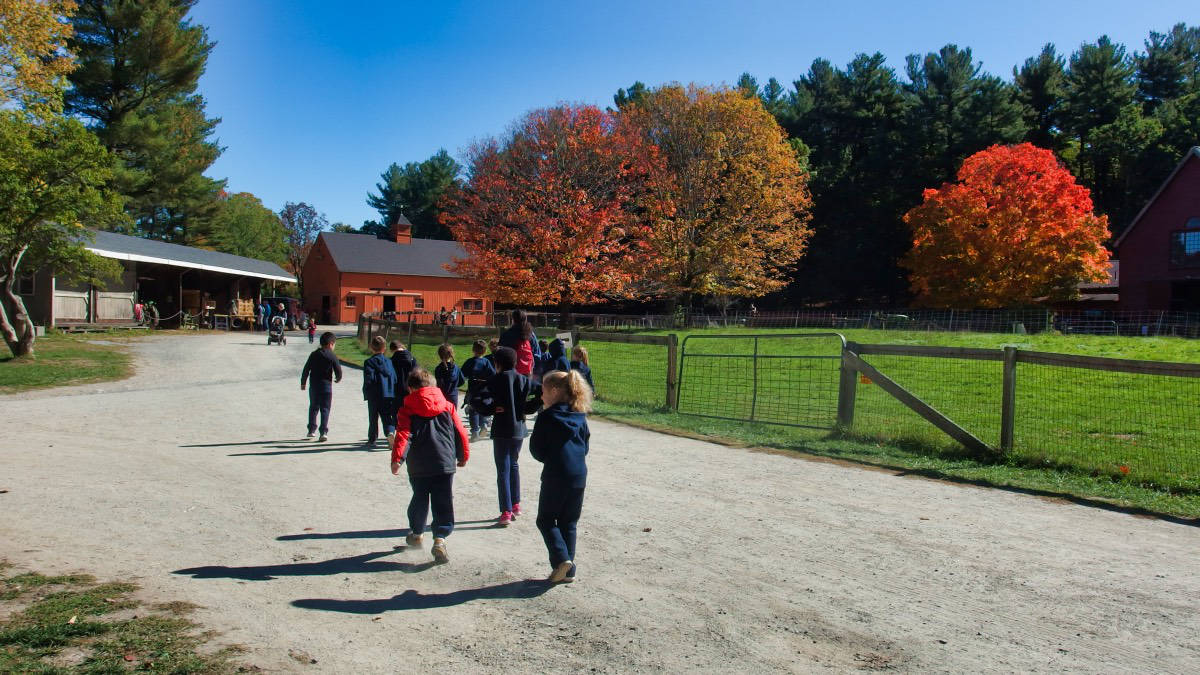 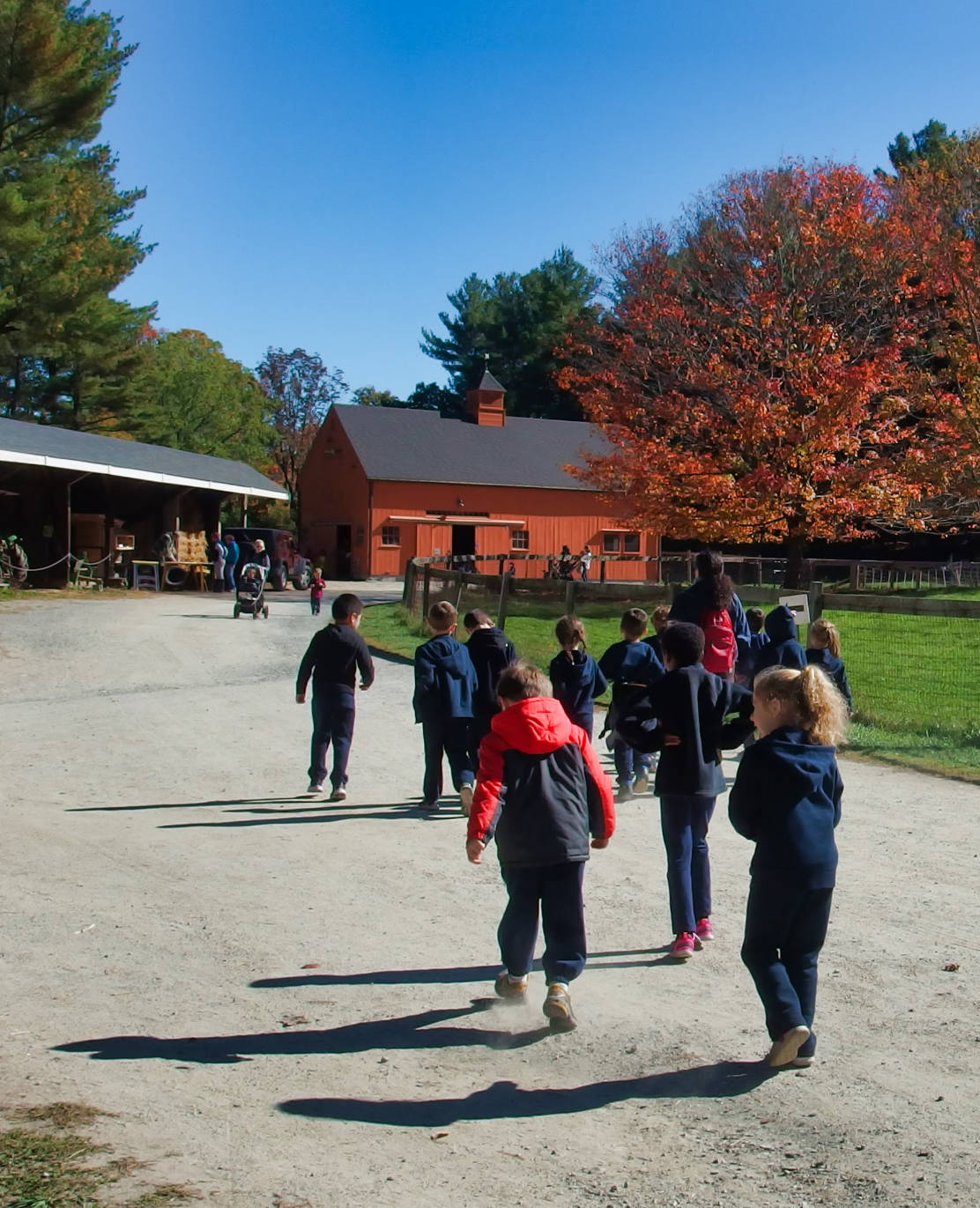 Drumlin Farm Wildlife Sanctuary sits on 220-acres of farmland which was given to the Massachusetts Audubon Society in 1955 by Louise Ayen Hathaway - a long time society member. The intent of the gift was to use it as a wildlife sanctuary.

The sanctuary first open to the public in the summer of 1956.

The Wildlife Sanctuary is open during the pandemic. Guests have to purchase tickets in advance. All the buildings are closed. Full details are available on the Mass Audubon new site.

There is a working farm at the sanctuary. Children can watch and learn all about the chores and responsibilities that are required every day to keep the farm going. 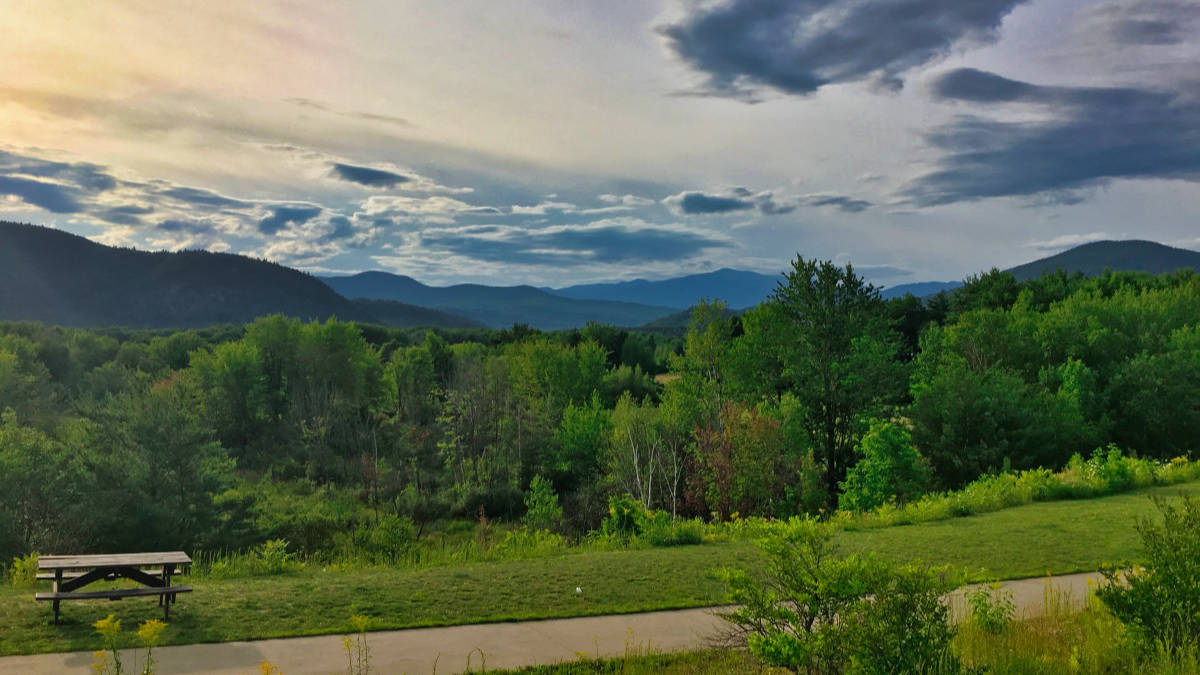 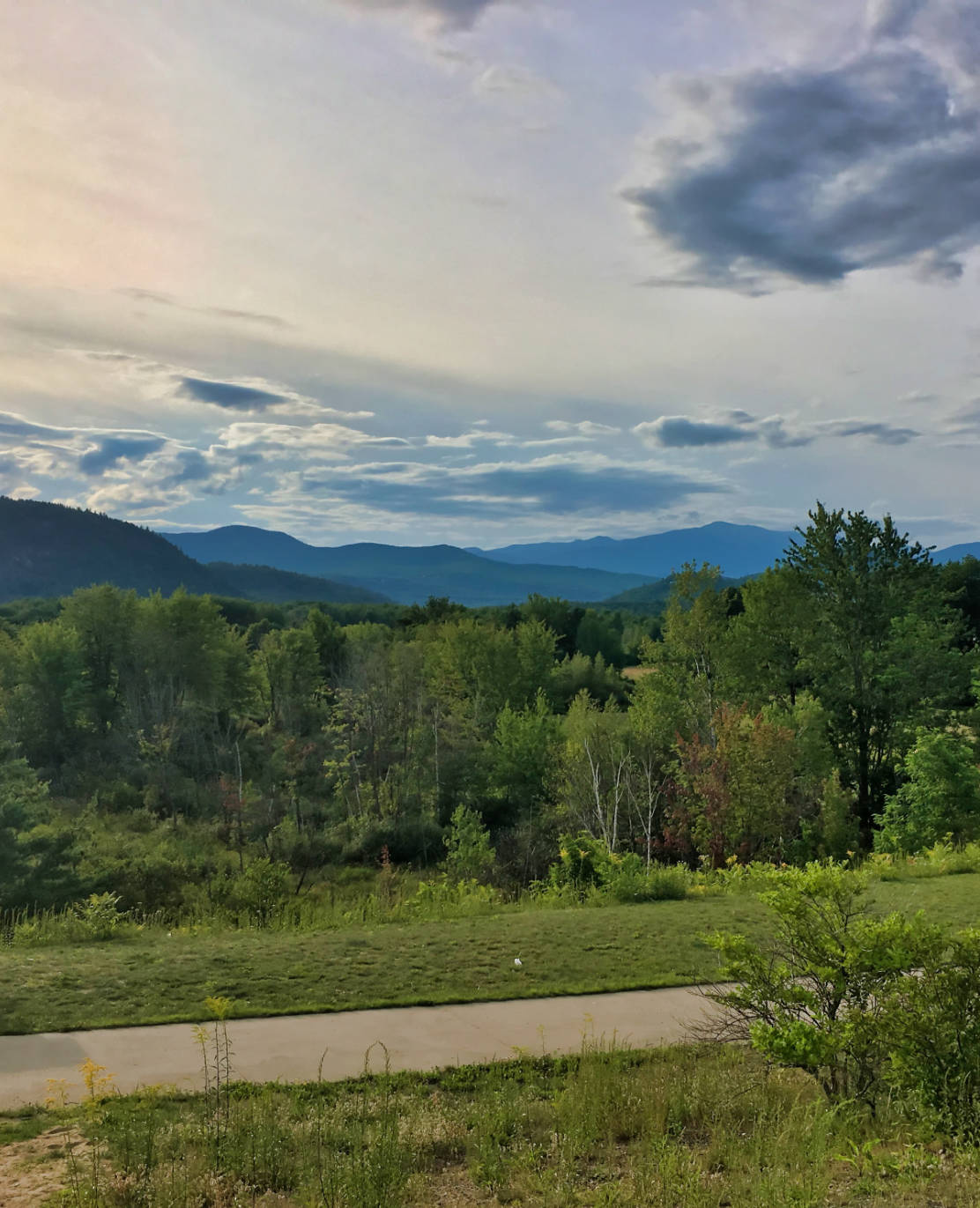 Intervale Scenic Vista is 2-miles North from the North Conway Five and Ten Store on US-302.