The Great Molasses flood occurred in Boston in January 1919. A tank explosion causes a sea of Molasses to cover parts of the North End of Boston.

Location of the United States Industrial Alcohol Company is now a Park and Ice Rink.

Eleven things I learned about the Boston Molasses Disaster

A list of the fatalities can be found on Wikipedia.

This was a great year for creative Boston Blog post. Lots of great content was discovered this year.

It was a lot of fun researching different topics and learning more about the city along the way. Hopefully, the post was entertaining and informative.

In no particular order....

There's still lots of great content planned for 2018. If you have any topics that you would like to see get covered let me know.

There are lots of places to park in Boston. I thought it would be interesting to find out the size of the parking garages in and around Boston.

These were gathered from various sources:

Parking Garages in the Boston Area

Here's an interesting list of other parking garages sizes in and around Boston. This information is accurate as of December 21, 2017.

Some Parking Garages along the MBTA routes:

Next to the Trinity Church, in Copley Square, is a statue of Phillips Brooks.

Things that I learned about Phillips Brooks and the Statue

Things that I learned about Phillips Brooks Statue

Last year I blogged about all the finish line locations for the Boston Marathon. It was a fun project to research the locations and the history of each site.

I looked at the blog content again and thought having a map would be a nice visual enhancement to the content.

Back bay has changed a little over the past few years. So using a standard Google maps isn't going to help in this situation. Fortunately, there is a map in the Back Bay MBTA station that is about 20 years old. So I'll use that to show where the finish lines were located.

I took a picture of the map on the Commuter rail platform and then used Super Vectorizer 2 to convert it to an SVG image. I did this to allow the lines and shapes to be more define and make the map a bit clearer to read. 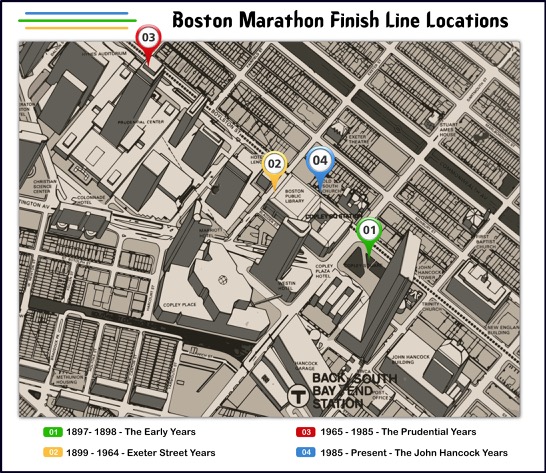 Click on image for a larger version of the map. 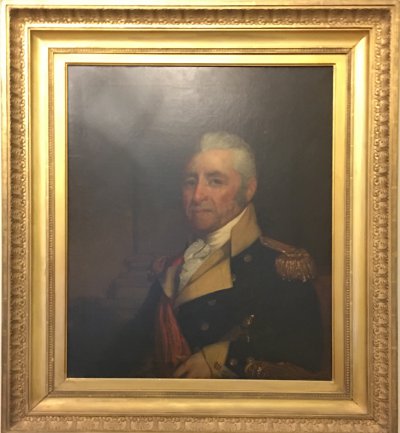 It?s a tradition for a state governor to have a proclamation for Thanksgiving. It?s a special way to give thanks and encourage people to spend time with their families.

Governor John Brooks was the 11th Governor of Massachusetts. He served from 1816?1823.

When this speech was given, there were only 19 states in the United States! The State of Maine was still part of Massachusetts, it wasn?t until March 15, 1820, when Maine became an independent state.

In the center hall of the Massachusetts State House is the ?Hall of Flags? in the center ceiling is a clock. Many people may not know about the history around this clock.