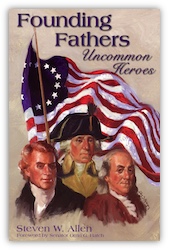 I found the following rant in my CD collection from 2003. This seems appropriate as tomorrow is Washington's Birthday and we are in the middle of the Presidental primary. Steven W. Allen is an author, speaker, and retired attorney:

I wonder how many remember why we have today off from work or school?

State and Valley municipalities seem to have forgotten, as not a single one has anything planned for Presidents Day. Originally designated as a memorial of Washington's birthday, the day has sadly dwindled from what it once was.

Some would argue George Washington's legacy is no longer relevant, yet had he not served as its leader, America as we know it would not exist.

Having recently written a book about George Washington and other founding fathers (Founding Fathers - Uncommon Heroes), I believe his contributions are more applicable today than ever before.

May we never forget Washington or any of the other men and women who shaped our nation. We owe them a huge debt for the freedoms we enjoy today.

I hope state and Valley municipalities will deem Washington worthy enough to honor with more than a paid holiday for employees next year.

Expensive and extravagant celebrations are not necessary; in fact, as a man who requested no funeral oration Washington would not want that, but his legacy should not be completely ignored.

You can find all sorts of books written by Steven W. Allen on his website: stevenallenbooks.com.

You can learn a lot from people searches. Google has a tool where you can see search and news trends.

Check out the Google Trend chart yourself and try other words to see what the trends, such as Apple vs Microsoft or Google+ vs Facebook.

This is the first time in decades that spots have been made available on the Founders's Wall at the Ronald Reagan Republican Center on Capitol Hill. These names are engraved on the walls surrounding an Eternal Flame that honors President Reagan and his conservative legacy.

The names that are added will be seen by thousands of visitors, include our Republican Senators - both those who serve now and those who will in the decades to come.

Don't miss out on the opportunity to have your name added. Claim your spot now with a donation of $25 or more.

The fact is there is no such wall at the Ronald Reagan Republican Center. There is a "Eternal Flame of Freedom" that is near National Republican Senatorial Committee. The Flame is not open to the public, which means that thousands of visitors can't really see it. The flame isn't even listed on the Eternal Flame wiki page list of eternal flames.

Behind the building is a small square courtyard visible from E Street NE. Walk up to the fence and you can see the Ronald Reagan eternal flame, which I think they call the "Eternal Flame of Freedom." This area is called the Republican Victory Monument. On one wall are inscribed the names of those who help out the party a lot (probably if they give enough money). The east wall is labeled the Founders Wall and has many more names.

Here is the official address for the Ronald Wilson Reagan Republican Center:

If your in the DC area, go ahead visit the Center and ask to see the Wall...

Looks like the Democrats have the fundraising edge in this election and a sure sign of what the outcome of the election will be. Most likely people aren't donating because they don't care. This is from the email blast to Republicans:

The Democrats have a massive fundraising advantage. Politico has reported that their campaign organizations have raised 157% more money than ours. This is a huge advantage for the Democrats; but we still have the opportunity to catch up and win a Republican Senate majority.

Makes no sense to donate to either of the Republican or Democrats PACs as they aren't tax deductible. Your better off contributing to some homeless shelter or buying brownies at a school bake sale.

In addition, I have never signed up for any Republican membership program, but they keep sending emails about renewing my membership. Right now the going rate for the membership to the NRCC is only $15. Last Tuesday it was $28.67. I think next week it will be $10.

Save a tree and don't donate. Care about this election, than just vote.

"America is an unlikely place - a country built on defiance of the odds; on a belief in the impossible. And I remind you of this because as you set out to live your own stories of success and achievement, it's now your turn to help keep it this way.

It's your turn to keep this daringly radical but unfailingly simple notion of America alive -that no matter where you're born or how much your parents have; no matter what you look like or what you believe in, you can still rise to become whatever you want; still go on to achieve great things; still pursue the happiness you hope for....

You will be tested. You won't always succeed. But know that you have it within your power to try -that generations who have come before you faced these same fears and uncertainties in their own time. And that through our collective labor, and through God's providence, and our willingness to shoulder each other's burdens, America will continue on its journey toward that distant horizon, and a better day."

- Barack Obama US Senator (D) of Illinois speak to the students at the University of Massachusetts at Boston class of 2006.

"A new national poll shows Mitt Romney is in a free fall with Newt Gingrich now leading for the GOP presidential nomination."

Seriously? Gingrich leads in the polls? Didn't the Republican's learn anything from 2008?

Does anyone think that Gingrich has a chance to win against Obama? Gingrich couldn't finish in the top 3 in Iowa and New Hampshire.

Let's see how this all plays out, but I don't think that Obama has much to worry about if Gingrich is the nominee.

On February 5, 1981, Ronald Reagan said in his Address on the Economy:

"What's happened to that American dream of owning a home? Only 10 years ago a family could buy a home, and the monthly payment averaged little more than a quarter -- 27 cents out of each dollar earned. Today, it takes 42 cents out of every dollar of income. So, fewer than 1 out of 11 families can afford to buy their first new home.

Regulations adopted by government with the best of intentions have added $666 to the cost of an automobile. It is estimated that altogether regulations of every kind, on shopkeepers, farmers, and major industries, add $100 billion or more to the cost of the goods and services we buy. And then another 20 billion is spent by government handling the paperwork created by those regulations.

I'm sure you're getting the idea that the audit presented to me found government policies of the last few decades responsible for our economic troubles. We forgot or just overlooked the fact that government -- any government -- has a built-in tendency to grow. Now, we all had a hand in looking to government for benefits as if government had some source of revenue other than our earnings. Many if not most of the things we thought of or that government offered to us seemed attractive."

Who would have guess that today's election in Massachusetts would be huge:

I don't know who will win, but everyone that I have talked to seem to favor Scott Brown. The polls close at 8pm tonight and it will be interesting to see when they call the race.

This election is the first time that voters can change the outcome of a major piece of election in Congress.

Currently there is no list of which city and towns have issued sales tax. This would be something that the Boston Globe or the Boston Herald should do.

Looks like that the First Time Homebuyer credit may get extended. Senator Johnny Isakson (R-GA) is pushing this through the Senate at a hearing today.

You can follow the results of the U.S. Senate Banking Committee hearing. After the hearing is over you can download the transcript of all the participants.

Read Senator Johnny Isakson floor statement on exapanding the Homebuyer Tax Credit until May of 2010. Here's a quote:

People will say: Well, it costs too much. Let's look at what we have done in 2 1/2 or 1 1/2 years in terms of cost to try to save an ailing economy. We have put $85 billion in 1 night in AIG. That is a lot more money than $16 billion. The Federal Reserve has at one place or another invested over $5 trillion. That is a lot more than $16 billion. The stimulus, which is a 2-year stimulus, which is just in its infancy of trying to make some difference, was $787 billion. The Troubled Asset Relief Program, or TARP, which was passed in October of last year, was $700 billion. Yet we have a proposal that has generated 350,000 sales, costs $16 billion, that is about to die, where all of those other programs and trillions of dollars have only saved a collapse but not regenerated an economy.