At the Massachusetts State House, near the Executive Wing, is a commemorative plaque for Henry Bradford Endicott.

Henry B. Endicott was an entrepreneur that came from a poor family and built an empire to be one of the richest men in the world. He built his wealth through the Endicott Johnson Corporation - a shoe manufacturer.

Henry B. Endicott gave back to the community:

You can learn a lot more about Henry Bradford Endicott in the book about him, Henry B. Endicott: A Brief Memoir of His Life and His Services to the State and Nation which is in the public domain. 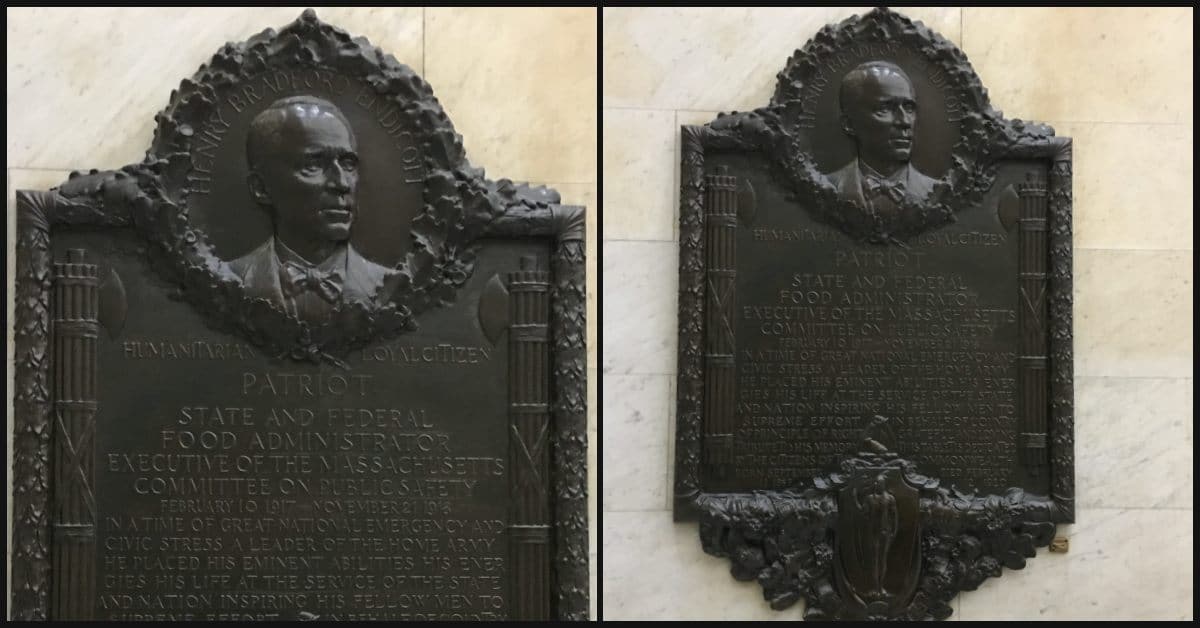 Six Fun Facts About the Plaque

Here some interesting things that I learned about this plaque:

This tablet was made by the T. F. McGann & Sons Founders, Boston Massachusetts. They also did the Marvin Goody Memorial in the Boston Public Gardens and the "Winged Victory" statue at the Boston's World War 2 Memorial to name a few of the local work. (T.F. McGann signature is on the bottom right on the plaque.)

Henry Hudson Kitson was the tablet sculptor - you can see the signature on the left side.

The tablet was unveiled by Massachusetts Governor Channing H. Cox on December 15, 1921 - 672 days after Henry B. Endicott died.

The Governor said at the ceremony, "It is then high privilege to accept on behalf of the Commonwealth this beautiful memorial tablet, authorized by law and made possible by devoted friends and coworkers-his fellow-citizens. It records a great service nobly rendered. It deserves its place on the walls of this historic hall."

Text of the Plaque

State and Federal
Food Administrator
Executive of the Massachusetts
Committee on Public Safety
February 10, 1917 - November 21, 1915
IN A TIME OF GREAT NATIONAL EMERGENCY AND CIVIC STRESS A LEADER OF THE HOME ARMY HE PLACED HIS EMINENT ABILITIES HIS ENERGIES HIS LIFE AT THE SERVICE OF THE STAT AND NATION INSPIRING HIS FELLOW MEN TO SUPREME EFFORT IN BEHALF OF COUNTRY OF PRINCIPLE OF RIGHT IN GRATEFUL AND LOVING TRIBUTE TO HIS MEMORY THIS TABLET IS DEDICATED BY THE CITIZENS OF THE COMMONWEALTH.
Born September 11, 1857 Died February 12, 1920.