As I was looking through the BBEdit's User Manual, one thing that caught my eye is the mention of "Quicksilver string ranking." This is only mentioned once in the document - in the Copyrights section and no place else.

This got me curious - just what is the "QuickSilver String Ranking" and why did BBEdit choose to use that Library. 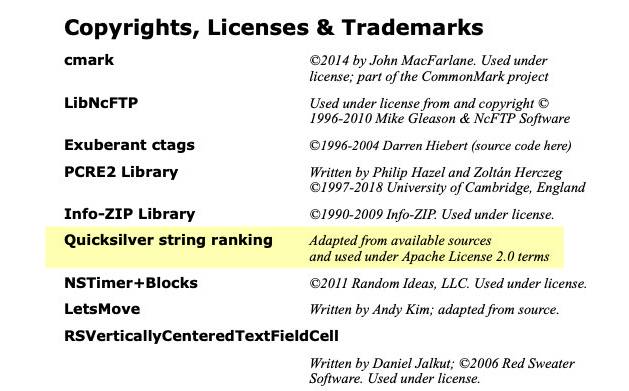 Quicksilver is a launcher utility app for Mac OS X which gives you the ability to perform common, every-day tasks rapidly and without thought.

I had some old BBEdit User Manual and found the first mention of the "QuickSilver String Ranking" was in BBEdit 11. One of the Release Note's "New Feature" in BBEdit 11 mentions this:

There's a new feature: "Highlight instances of selected text". When you select something (that doesn't consist entirely of whitespace or punctuation), all of the occurrences of the selection are underlined; and the new pair of commands on the Search menu ("Next Occurrence of ", "The previous Occurrence of ") can be used to navigate the occurrences. (This navigation is independent of the text searching UI, although the string is added to the search history for convenience of future use.)

I believe that this is the purpose of the "QuickSilver String Ranking."

There's is this code example on quicksilver_score.php on GitHub, which gives a lot more insight to how the QuickSilver string ranking.

Filed under the "BBEdit" category.