The Deluxe Depot Diner in Framingham opened up in 2016 and has gotten great reviews from local residences. We have driven by the restaurant several times to see many cars parked in the front.

I recently checked the "Find my Gluten Free" app and was surprised that to find it ranked pretty high, so we decided to check it out.

The menu is a bit confusing as there isn't a whole lot of items that were marked as gluten free. We talked to our server and he told us that he would let use know if a dish could be made gluten free.

For example, the Deluxe Depot Diner has Gluten Free bread for sandwiches and hamburgers but there wasn't any indicator on the specific sandwiches were gluten free.

We settled on the Gluten Free pancakes, as my daughter was excited to try them.

We wanted to order a side of bacon, but the server told us that they weren't gluten free as they were cooked with other foods that contained gluten. While we were a bit disappointed that she couldn't have bacon, we were impressed that someone was aware of cross contamination.

We ended up settling for just chocolate chip pancakes, and if she was still hungry we could order another pancake. We were told that the pancake was pretty big, so we decided to try one.

The pancake was very good. My daughter only ate half of it and wanted to take the rest home. This is typical of how she eats, she never finishes a full meal when we eat out.

When I asked her if she liked it, she gave me a typical 2 thumbs up. 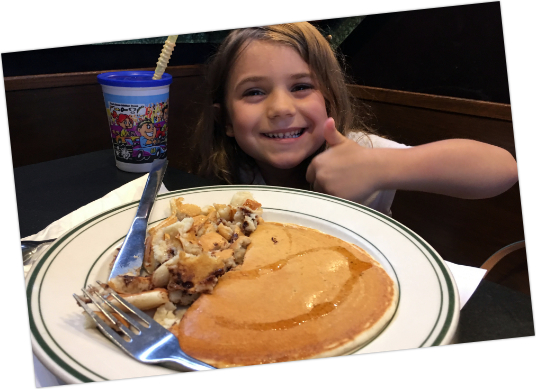 We'll certainly come back again. In fact, we liked the place so much that we visited the place twice within a week time. The restaurant was nice and quiet, and even though it's next to the train tracks, the trains weren't making all that much noise as they went by.