If you're eating Gluten free, you do have some options for French Toast: 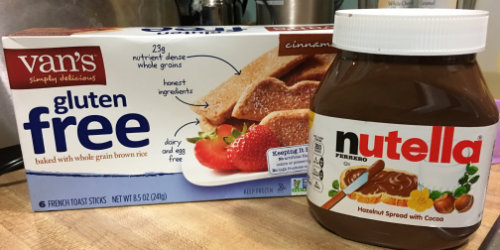 My five-year-old daughter really loves Van’s Foods Cinnamon French Toast Sticks. We have a couple of boxes in the freezer in our basement, always making sure that they are always available.

We find that they are better served with a nice dab of Nutella on the side. She actually prefers that way.

The French toast are perfect for dipping.

You put the pre-slice bread in the toaster for about a minute, and then take them out and separate around the chocolate. I find they taste better when you click the frozen button on the toaster.

If your kindergarten has celiac is looking for a good breakfast treat, stock up on Van’s Foods Cinnamon French Toast Sticks.

The Cinnamon French Toast Sticks are expensive (~$5 for 12 slices) to have every day for breakfast. They are a great treat when you're looking for something different than the usual cold cereal.

They are also nice snack on a really cold day.