BetterTouchTool is a keyboard replacement tool, it allows you to re-assign functionalities to different keyboards and mouse actions. This is great when you have a keyboard that has unused keys.

The BetterTouchTool has a lot of configurable options. For example, you can now assign the 'Paste' function to the F15 key, no more Command-V in any application! You can even change the 'Home' button to be an actual browser home button. How cool is that! 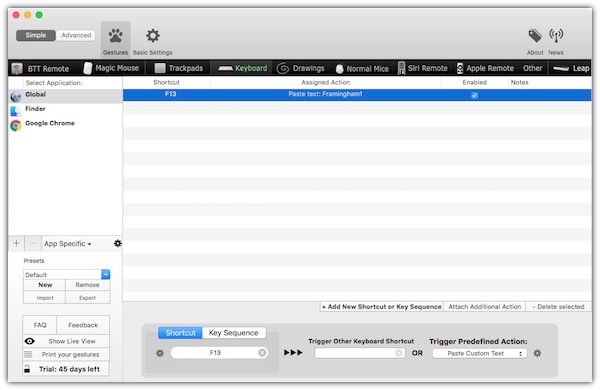 If your a Web Developer you can assign the the F16 (Or any F Key) to open FireFox WebConsole and Chrome Developer Tools - depending which application is currently active. Now you don't have to remember the different keyboard shortcuts when your debugging a page.

There's all sorts of configuration that you can do with the Magic Mouse, Trackpads, Drawings, and Siri Remote. There's lots of possibilities to spread your trigger actions.

BetterTouchTool has a built in Screen Capture functionality with an image editor. It's pretty good. My only complaint is how the arrow get drawn on the image. When you select the arrow in the top menu the arrow automatically appears in the middle of the image. The user then you have to move it to where you want. I do like that the arrow has a better curve style than what's in Skitch and MonoSnap. The magnifying glass tool is pretty cool.

Screen Capture with the Magnifying tool.

I configured BetterTouchTool so that when I "Move Mouse to Bottom Right Corner," the computer acts as if I did a Command-Shift-4. After I selected the capture area, I then can edit in BetterTouchTool. Once done editing, I have multiple options: I can save to a file, upload to my imgur.com account, create a new email with attachment, copy to clipboard and so much more!

I have been trying to get BetterTouchTool to work with my Logitech Mx518 mouse with very little success. There are three buttons that are on the top of the mouse that I would like to use. There is a "Volume Up, Volume Down" and some "Power" button.

I installed the latest Logitech Gaming Software, which has the latest drivers, but BetterTouchTool still doesn't recognize the buttons when I try to assign a Trigger action. 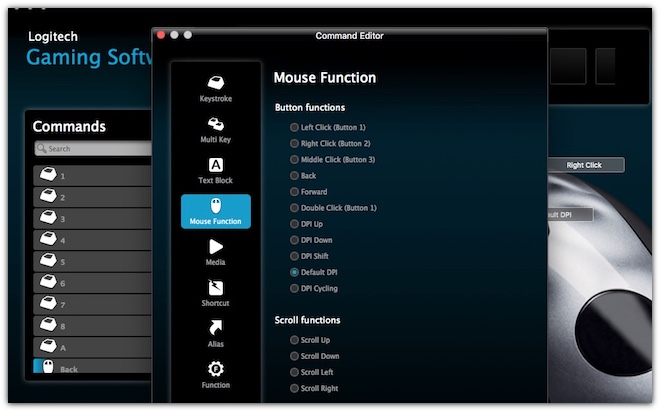 It turns out that you can actions to the mouse using the Logitech Gaming Software. While not as fancy as the BetterTouchTool, it still has some basic actions that make it worth while. There is a work around and that's to use the keyboard assignment and then use BetterTouchTool's Keyboard Shortcut tab to further configure it.

There is some discussion on the Logitech Forum about configuring the device to work with third party apps: MX Master Logitech Options SW Feature.

While I am disappointed that I can't easily configure my Logitech Mouse, I am excited that I have five new keys on my keyboard. Now my hands can move to the other side of the keyboard more often.

BetterTouchTool use to be free, but it's now a very active application and Andreas Hegenberg, the Developer, has changed it to a "Pay what you want." The current minimum bid is $4.50. I highly recommend at least covering the cost of a a couple cold beers, as an appreciation for all his hard work.

Google has a updated table of the Cost of Living in Munich. You can see how much Domestic Beer, Cappuccino is.

I did try out BetterTouchTool and will certainly be purchasing it.