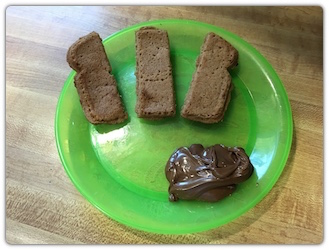 My daughter's favorite morning breakfast is the Van's Gluten Free French Toast Sticks with a small dab of Nutella on the side. She asks me to make the French Toast for her while she slowly wakes up to whatever is on the Disney Junior Channel. It's a great morning routine.

Van's Gluten Free French Toast Sticks are really good. Usually, one French Toast Stick is just enough for my daughter, there are 6 french toast sticks in the box. The only time that she doesn't have them is when she wants leftover scramble eggs.

She loves to dip the French Toast sticks in the small pile of Nutella that I put on her plate.

There are 95 calories in 1 slice of Van's Cinnamon French Toast Sticks. You'd need to walk 25 minutes to burn those 95 calories. She'll easily burn off those calories before her class starts.

We buy the large size container of Nutella. We go through a lot of it. I am very careful to make sure that there's only a small amount of Nutella on her plate. Anything she doesn't eat, I enjoy as a morning snack.

You can find the Van's Gluten Free French Toast Sticks in the specialty frozen food section in most supermarkets. Usually, they are with the other frozen gluten free foods. They are available at Stop and Shop and at Wegmans. We'll stock up when they go on sale since they are a bit expensive - about $3.99 for the box.