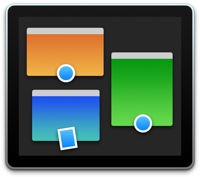 Apple created Mission Control in OS X to give users a bird's-eye view of all your open windows, desktop spaces, full-screen apps, and Split View spaces, making it easy to switch between them. Mission Control was first introduced in 2003 as a new feature in Mac OS X 10.3 Panther.

The ultimate goal of using Mission Control is to declutter your main desktop from other Application that your not using now. You could set up a desktop for Mail, and another desktop for Graphics. If you need to do something else, you just switch to a different desktop space. Apple makes this easy with the Magic Mouse and swiping up using three or four fingers, pressing the Mission Control key, or pressing Control-Up Arrow.

Why Would Anyone Use Mission Control?

Mission Control is great when you work in different server environments. You could setup Desktops for Production, Staging, and Development. Which unique desktop backgrounds so that you know which environment that your using. This isn't something that you would do every day, but on deployment days or when you're up late doing testing it can be handy. Also, I find that using multiple Desktop functionality works best when your dealing with a bunch of applications over a few hours.

It will take some time to get used to using multiple desktops, especially if you already have a couple of monitors set up. Try using it for a while, see if it helps you stay more focus at hand.

Some tips and tricks on using Mission Control

Here are some of the things that I have learned using Mission Control:

So if you're using Chrome, Firefox, Pixelmator, Evernote, iTerm, pgAdmin and other applications right now, you should think about how Mission Control could help make you more productive.