Did you know that there is a difference when you do a screen capture on a MacBook Pro with Retina display than if you use an Apple Thunderbolt Display? Screen captures on the Retina displays are in Hi_Res and are significantly larger than the exact same capture size on a Thunderbolt display. I accidently discovered this when I notice that some of my screen captures were a lot bigger in size than what I normally capture.

So I did an experiment and decided to use the OS X El Capitan built in screen capture and capture the finder's "About" dialog box on the built-in display and the Thunderbolt display. I then checked out the Info on the two captures and found that the screen capture on the Retina display was significantly higher. 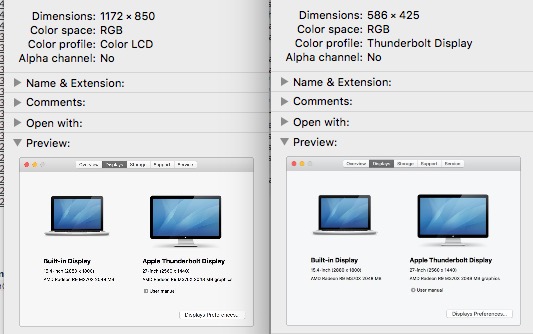 When you do a screen capture with a Retina display the image resolution is 144 pixels versus the 72 pixels when you capture using a non-retina display.

This capture can be a problem when you are sharing the image with others that don't have Retina display as the image will be considerably bigger on their monitors. In addition, the image size is much bigger. In my test, the Thunderbolt display capture was 49 KB, whereas the Retina display was 107 KB.

One solution that I found is to use MonoSnap to do your captures. After you capture an image, there is an option to "Shrink Retina Snaps." This will make the image the "normal" size to share.

Hope this helps someone else that encounters large screen capture issues on Retina displays.