On October 16th, I blogged about how I setup a template in Pixelmator to use as a canvas. I have since discovered that OmniGraffle offers some cool touch up capabilities that I am looking for.

Don't get me wrong, I like the capabilities of Pixelmator, but OmniGraffle seems to have more powerful "basic" post production touch up functionality. Ya, that does sound a bit redundant. But here me out!

After I take a screen of action in a web browser, I usually need to touch up the image a bit. Something of the common tasks that I perform:

In OmniGraffle this is very easy to do, you can drag and drop an image to a template, do some manipulation and export the image as an object. For example, I can resize the image, touch it up, add some arrows and drop shadow or glow.

What's really cool is that when I am done I can export the image and only the object gets exported. So I don't have to worry about cropping the canvas. I can have a nice large canvas open to do my work and then just export the final copy. Very cool and a very handy Macintosh tool. 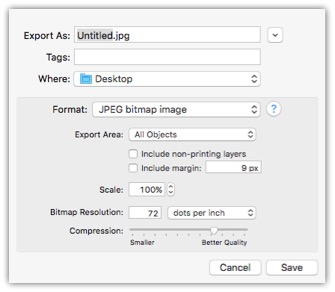 This allows me to touch up images and size then correctly for emails or to attach to Jira issues. It so easy to combine pictures and highlight certain sections.

I am still using an old version of OmniGraffle Pro (5.4.4) and haven't decided if it's worth paying $49.99 to upgrade to OmniGraffle 6. I just found out that I registered for Omnigraffle Professional 5 on December 12, 2007. I have been using this version for 8 years. I guess I should see what's the Developers have been up to in the past 8 years.

I also have been looking at some other Graphic Design applications such as Autodesk Graphic and Artboard. They may offer more functions and make some screen shots look even better. The other advantage of the other apps is that they have the ability to open EPS files (vector graphics) and that's something I need for files I get from Creative Market.

I know that what I am doing isn't the purpose of OmniGraffle, but for me it seems to be the perfect tool.