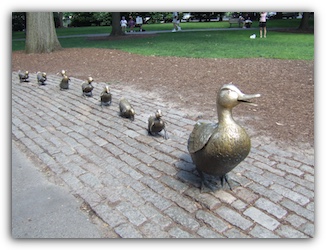 Make Way for Ducklings is a children's picture book written and illustrated by Robert McCluskey. It was published in 1941. The book was very popular and has since sold more than 2 million copies. On Amazon, it currently ranks 96,890 in the Kindle Store.

It has won numerous awards including the Caldecott Medal which has been featured on the book cover since 1942.

The idea for the statue came from Suzanne DeMonchaux, an urban planner, who thought the statues would make the park more kids friendly. The statues were created by Nancy Schon in 1985.

It cost $85,000 to build the statues and cobblestone landscape. All the money raised was from private donors - no public money was used. Donators from all over the United States contributed to building the statues.

Other Statues by Nancy Schon's

Nancy Schon's other work in Boston include:

According to current copyright laws, the book will be in the public domain in 2037.

The names of the Ducks (in order of appearance) are Mrs. Mallard, Jack, Kack, Lack, Mack, Nack, Ouack, Pack, and Quack.

Each duckling weighs about 30 pounds.

There are public sculptures of the ducklings both in Boston and Moscow. The Ducklings were Installed on July 30, 1991, in Novodevichy Park, Moscow, USSR. Presented by Barbara Bush.

David Mugar purchased the rights to the "Make Way for Ducklings" in 1983.

June 9th, 1984 -When Donald Duck came to visit Boston on his 50th birthday he got a copy of the Make Way for Ducklings book as a gift from the City of Boston.

The Swan Boats have been running in the Boston Gardens since 1870, by the Pagets family.

Every Mother's Day there is a parade to celebrate "Make way for Ducklings." Over 1,000 people parade through the parks dressed like characters from the story.

There is no perfect time to visit the statues for pictures. If you arrive in the early morning you can get nice pictures of the Swan boats in the background.

Despite being very welded into the ground people have successfully stolen some of the Ducklings. 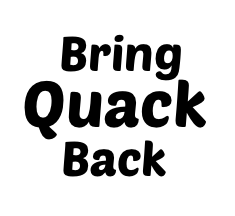 Here are some of the well-known reported cases:

When Quack was stolen in 1992, children around Boston we very disappointed and came up with the following slogan: "Bring Quack Back." T-Shirts and Bumper stickers were made to bring awareness to the missing statue. The statue was never found and was replaced.

Stealing the statues is a serious offense since it cost between $8,000 to $10,000 to replace any one of the ducklings.

If you know the whereabouts of the original Quack and Mack, please contact the local police. You can use their anonymous hotline. Please "Bring Quack Back!"

Location of the Statues

The "Make Way for Ducklings" statues are located in the northeast corner of the Boston's Public Gardens. It's near the gate at the corner of Beacon Street and Charles Street.

The Boston Gardens is open every day of the year from Sunrise to Sunset.